*Ahem* Doc won't take pictures of me in my new "look" because he hates it. So things are going well. There's still an embargo on talking going on. He was absolutely useless last night. I had to finish the decorations myself, except for the alien eggs, because he was convinced I was going to fuck that up. They turned out cool. Really cool. We got many compliments on them. I had to handle all of the kids who came to the door. I couldn't even go to the bathroom. For three hours. While he just sat here micro managing from his couch and making snide comments on the things I said to the kids. It was a joy.

I don't like arting in front of him. It doesn't always happen, but sometimes, he will look over and see what I am doing and make a negative comment, or a comment that he thinks is constructive but actually shows that he doesn't get it at all, and it upsets me, a lot. So, I don't do much in front of him aside from experiment. Speaking of which, He forgot to bring home cheap shaving cream. Also need cheap dish soap. And another box of kosher salt.

Then I need a frightening amount of salt for a recipe meant to soften/age t shirts. I have many t shirts that I would happily wear if they weren't so damn stiff. And all of my soft ones are too small on me right now. So I want to soften about half a dozen shirts and three pair of jeans. What I need is one of those big bags of rock salt for water softeners. It's just a matter of getting it home. Doc can't bring it home on his bike. Maybe we could Uber it. They are making such a big deal about Uber changing the way suburbanites are able to travel without their own cars, time to put it to the test. This will save me so much money in new clothes, it would be worth the car fare, I'm pretty sure. 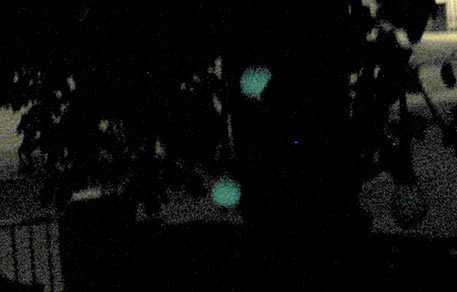 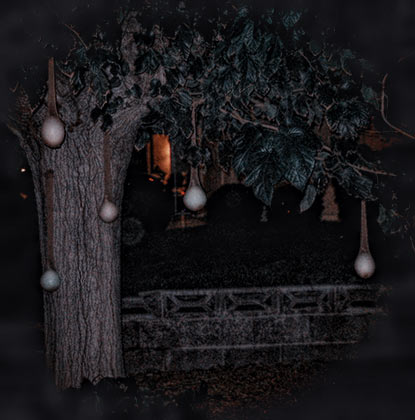 The alien eggs. We couldn't get a good picture of them. So I've brightened one that came out almost black, and retrieved what derail I could; and on the other, darkened it up to reflect the spookiness of it. They were cool. Pro Tip: go with the yellow/green light sticks. Use regular sized balloons, not water balloons, whoever offered that advice never tried it. We used knee-highs because Tree hangs so low. You can easily use any size stocking. The picture you see circulating Pinterest is not achievable by the methods described. It is a photo of glass globes with lights in them. If you look carefully, you can see the white cords going up with the stocking. Brilliant idea, not the result you'll get when you stick glow sticks into white balloons filled with water. But you will still get something really fucking cool. And they still look like Alien Eggs. They just don't light up the driveway.

My Windows Media Player is sentient. Wait. Hear me out. It is at least capable of reading my moods on a deeper level than I am. Every day when I open it, I hit "shuffle". and it always gives up to me what I need to hear the most. It is uncanny.

I found this draft, so I'm posting it.

I spent most of the night messing with the Wordpress. Yes, it has a "the" now in front of it. It is an intellent beast, sent here to challenge me. Now I am battling the Mystery of the Disconnected WiFi. The modem is on and active. The router is on and active. The computer is on and active. But there is a disconnect somewhere, and none of these damned machines will tell me which one is causing the problem! So, I can't see the work I did last night, if it even saved. It wasn't much, but I spent so much time messing about with plugins meant to help me with the CSS-ssssssss...thump* (that is my face hitting the cushion of the couch next to me). I am so inadequate!!

Okay, I've gotten that off my chest. I just needed to yell that pretty loudly and all the windows are open here, you understand. It's going to be bitchin'! I am bitchin'! I'm going to have most of my portfolio playing in a slideshow on my front page. How's that for advertising? Been to my site? Seen my art.

You know how I know I have a lot of work to do online? I have no fucking internet connection! It's been out since last night. The router, the modem, they are fine. I have been up since 3 arguing with the DNS server, trying to make it angry enough to talk to me for just a little while. No go. I have maybe an hour left before I have to give up the computer and that isn't long enough to get into anything. Grrrr. Arrrr.

I would work in Photoshop, but I don't know what I need. This is maddening. Absolutely. I mean, really. Things finally get up and working and this. Always this. Why this? Our cable bill is paid. It isn't a service outage, our TV cable is fine. Every connection has been tightened and adjusted. No connection on the Drone, either. And I can't network them, so I don't know if that is working. Bollocks!

I am mon the verge of losing my damn mind. I mean, Doc can't take it because everything he does is online. But that does me no good because, well, I have the same problem. This laptop is a paperweight right now. He is in cooking and cleaning up his mess as he goes (lesson on caring learned). I should cook. I have to make a loaf of Chocolate Chip Hazelnut Banana Bread. I made that up and was surprised to find a ton of recipes for it. So, I'll print up the most delicious sounding one and make it later. Let the holiday cooking begin!

I got the envelopes for the Christmas Art Cards. They will be a nice size once they are cut down and folded, I got a nice size envelope. Didn't look at a ruler, either. And I have pine cones to paint and glitter (and clear coat, I'm no fool). Then I have paper to cut, covers to cut and glue, and a Nativity Scene to build out of the Big Booze Box in the garage.

Oh, and I need to, when Doc is asleep and there is plenty of natural light in here, take pictures of my products for the store. It's all up and ready to be stocked and personalized. I even made an ad for it for my ad plugin. Have to do something with it. Now-ish. He won't do anything but hinder me. I wish the wind would calm down.

They said it would be breezy, they didn't say 25 mph winds with gusts of thirty (Oh sweet jesus, there goes a cat.*Which one?*Who can say? It was black. Oh, wait, it's grabbed onto the Really Big Tree. It's Freddie.*Oh, she's tenacious.*) five mph every 5 seconds or so. It is brutal out there. Speaking of "brutal" . . .

My tagline for my site . . . I had to come up with something other than "Cydniey is a Fabulous Disaster" - that was so old. So I changed it to "Art Brut, Brutal Poetry, Schizophrenia so Close-up it's Mundane.", So, I did that. I should pretty much change that to my tagline on all of my social media accounts.