It's a little after 4am. I've been up an hour. I've made fresh coffee and done the kitchen cleaning. I wasn't going to, for passive aggressive reasons, but nixed that idea. We have too much of that around here already.

Doc was mad at me when he got up last night. I'm not sure why. The doorbell rang while he was sleeping, not my fault. It was really windy, so I woke him up 15 minutes early, which got me cursed, and he still didn't get up early. Other than that, I have no idea why my offense could have been. It was the first day in weeks that he hasn't insulted me before leaving, so, really, I was happy with it.

It's going to be super windy today, so we have to wait until tomorrow to put up the rest of our decorations. We have a human sized skeleton in pieces and spider webbing and giant glow in the dark googly eyes and the alien eggs and a door cover. I wanted to lay the bones out on the rock, kind of coming out of it. Doc wants to put the bones in the big bush like the big bush ate a human and is spitting the bones out. I kind of like that idea better.

We have ALL the candy. He brought home more. I'm going to have to pour it all into a tall kitchen garbage bag and mix it up. It's something like three full-to-bursting grocery bags of candy. So much of it I want to eat, and I can't. Oh well. I'm wearing a shit today that hugs my pot belly, I don't need Tootsie Rolls.

Felix, Bagira and Vader refuse to go on lock down. I'm not that worried, though. They are also the three that will tear a stranger's face off before letting them touch them. It was more Teeny I was worried about. She is in and safe.

I got my new arm warmers yesterday, in case you don't follow me on Faccebook. They cover all my scars on my arms. Plus they slenderize my arms, can't best that. 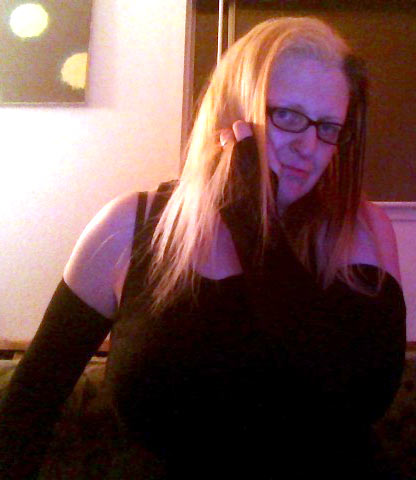 I'm still obsessing over that tutorial. I've tried it every way I can think of. I can get an almost result. I'm going to go with bad cut out image to excuse the latest failure. And the particular gradient I used for the background was a tragic mistake. That will have to be adjusted. It's hard to choose a gradient that you know is going to be rendered down to two either black or white. And sometimes what you thought would be black turns out to be glaring white. That happened this time, so that definitely has to be messed with.

I've got a gig and a half of my 4 gig playlist rebuilt. Fantastic progress for me, since it isn't a priority to me. I found a program that will take your Windows Media Playlist and save all of the files to a folder you determine. Do that, copy them to the USB playlist drive, and there you have it. So I did that with all of my short playlists, and ended up with 1/4 of what I lost. Doing pretty good. Long enough now that I can leave it on for a good amount of time without hearing repeats. Yeah, 16 hours. That will do for now.

Okay, my tummy hurts. Time for some yogurt. I heard a rumor I'm getting chili for lunch around 11. Right now I need my meds, some pain reliever, fresh coffee and a smoke. Then I'll vacuum and see what the rest of the day is going to bring me. Hopefully some green.

Doc was in a Very Bad Mood all day. I tried to make it better, I just made it worse. We got along for a little while, and then I think I set him off again, somehow (I really am clueless with reading other people), and he stayed grumpy until making it a point to go to sleep at a time that promises he will not be able to get me tobacco tonight, and I am out. So, he's really pissed at me.

And, I'm afraid he says he has no memory of promising to help me put up the last of the Halloween decorations tomorrow. And he got quite upset about it, telling me to shut up.

Then he told me I was constantly talking and could I just give him a fucking break? So I put my headphones on and started up the Playlist of Doom, and he got up and went to bed. Ack!

So, I'm trying to chill out.

Oh, and under the guise of protecting my sensibilities, he told me people were coming over tomorrow, so I should schedule my sleep for that so I'm in my room. He doesn't want me around. Just fucking tell me that. What a boob. I can fucking take it, I take his fat-shaming BS all the time, I can certainly hear that he would be more comfortable drinking with his friends if he knew I was sleeping. He eventually did say that, but I had to pull four of his molars and an incisor to get it out of him.

So, poetry in German. I can't find where I wrote about it now. But somewhere on social media, I made the decision to pen a poetry book and translate it to German, and then publish it exclusively in German. I have no idea why. Let's just say it came to me in a dream. I'm in touch with a man born in Germany, who used to translate, and is very familiar with American idioms and word play. I'm trying to think of how to approach him. I will tonight, at some point. I might art first to unwind, though I could also take another half a Xanax without hurting my supply. Okay.

I need an agent. I can't represent myself in person offline. I just can't until my teeth are fixed. I need someone who knows what they are doing and needs a part time gig that may pay something or may not, who's just in it for the fun. And it would be fun. Because once I get a chance to get all this stuff out, I'm going to need a place to put it out there, and not just on the web. I want people to touch it. With clean hands. There is so much I want to say, and the words only come out of me in images more and more now.
Collapse