So, I has a pissed. I've just finished a Seroquel nap, woken up and cleaned all of Doc's messes from the weekend, and now await his waking. It is raining off and on, and I have the strong feeling he will not be going to work tonight. Which just increases my pissed.

To combat this, I am listening to my newest playlist (Sunday TV is pure SHITE) and relaxing with some coffee, trying to think of what I can eat that won't make me sick and will fulfill the 350 calorie minimum so I can take my Latuda, which I did not do yesterday, I was too sick. The bread is stale, so no sandwiches. There is no cocktail sauce, so no popcorn shrimp, the dumplings are gone. Flatbread, hummus and crumbled feta would have to be consumed in MASS quantities to get to the calorie count, so that's out. I have chili and tots and cheese, but that made me sick last time. I also have breaded cheese sticks, but the same thing with the sick. I am at the end of my guessing. I could really go for some Arby's faux roast beef, but Doc won't go get them before work, he gets up with barely enough time to get to work as it is. And if he stays home, he certainly isn't going to go out on an Arby's run for me.

I'm still low on energy, so the really obvious answer of home made mac and cheese is elusive. I do not have the wherewithal to shred the cheese and make a roux. Doc also wants me to create banana bread. Ugh, the thought of standing in a hot kitchen makes me want to melt into the couch like warm latex.

I have to drop the attitude quick, or he's going to spend the next hour and 45 minutes repeating "What's wrong I know you're lying to me and I don't appreciate it so stop being a liar and tell me what is wrong I know something is wrong you're just a liar." He recently discovered that the one word I don't like being called is "liar", so he uses it liberally when we argue, or he is trying to get a reaction out of me. I am embarrassed to say it always works.

He's going to come in, bitch about my music, insist I turn it off, and turn on Anthony Bourdain. While I used to love Anthony Bourdain, I now find him an arrogant boor. I can't even stand the sound of his smug, elite voice. It hurts me to see him wandering the streets of the world in Ramones t-shirts, as if he were still in touch with that part of him self. As if that part of himself didn't die off a decade ago.

Oh, Doc has a new thing. Whenever I am sarcastic, he claims I have cut him deeply, that I know I have, that I have on purpose, and that I am a monster for it. Is it any wonder there is a lot of silence here? We just can't get on the same page. As has happened in the past, with others, as I get better, the other person in the relationship starts to get weird. The better I get, the worse they get with their neuroses. So I don't have time to revel in my better, I have to figure out why everything that is good in my life is a threat or a slight to them. It's happening again.

It happened with Douchebag, and we beat the shit out of each other over it. That was just our dynamic. He got weird and more abusive, and I finally beat him up because I got physically stronger than him and I was sick of him throwing me around by my wrists. Doc and I don't have that mutually abusive dynamic. I got rid of that before I met him. And he isn't that sort of man. So it's just the weirdness. 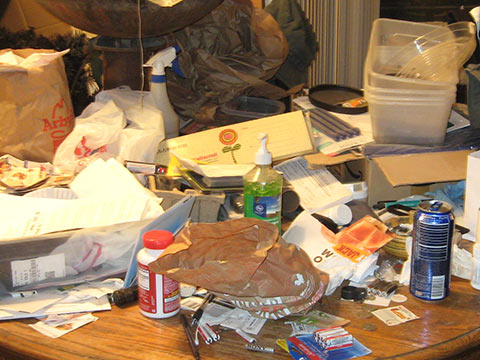 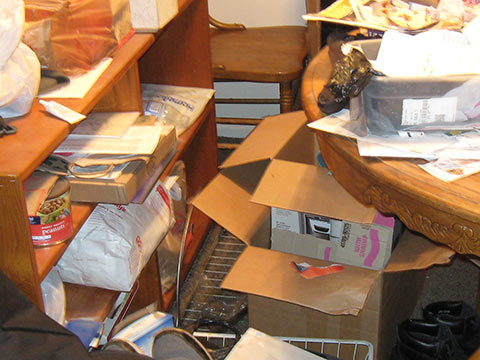 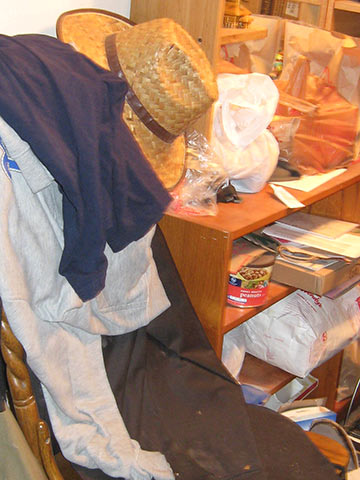 This is what was once my dining room. It has been under siege for two years. I'm not allowed to touch anything. From my position on my couch, I face it, and so must stare at it all day. Doc does not seem to understand when I see it, I go into a murderous rage.