I know, I could take my meds and knock myself out, but this is organic, this energy. I stopped drinking coffee this morning at 4am. It is now 7pm. I have been drinking ice water and low-sugar electrolyte juice all day. So this isn't coffee related. This is all me. All my own brain chemicals.

Doc is asleep, so I don't have to worry about freaking him out with my "schizy movements", as he describes them.

I thought of a title for my poetry book. I'm going to publish it through "Blurb" (blurb.com). I can sell it on amazon.com and buy it cheap in bulk if I get a windfall. I'm going to include graphics in it. I'm not sure to what extent. None of my high res stuff. I'm going with "economy color", so full-color photos and lomo photos are out. Though there are some vintage effect photos I might use. And I'm going to go all out with the cover. I was looking at covers in their store and people really go to town. Spending easily as much time on the cover as I spend on my soundcloud.com icons for the pieces. So I'm going to whip out all my Photoshop skillz for this one.

I came up with 8 chapter headings, each with a brief blurb about it. Each chapter title page will have graphics on it, in very washed out colors, or greyscale. I'm finally installing InDesign because it has a Blurb plug-in with the Adobe interface that I am used to. I really don't want to learn a new piece of software right now. InDesign doesn't count as new because I've played with it before and because it's Adobe.

My brain was impregnated with a zygote of this idea while on Pinterest. I developed it in my head for about a week and then tried it out. It turned out delicious, so I am sharing it with you. The lower class status has been assigned (with tongue-in-cheek) because the "crust" is actually tinned biscuits, and milk is used instead of cream. Oh, and they are made in muffin tins instead of a quiche/tart pan. Of Note: the muffin tins I used are commercial, so they are very large. I had to use the "Grands" xtra large biscuits. You will likely be using regular cupcake/muffin tins, so use the regular sized biscuits, or you will have too much crust and not enough filling. I do not recommend trying this in mini muffin tins. 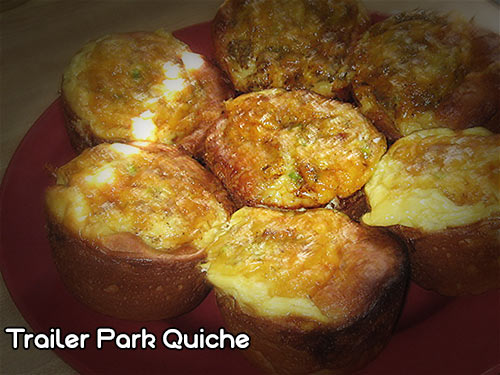 Preheat oven to 350 degrees F
Grease muffin tins. Do not use cupcake papers for this recipe. 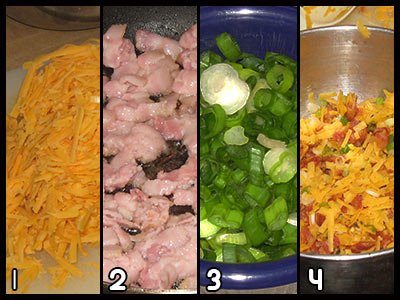 1. 1 cup shredded cheese - for this I used aged sharp cheddar***
2. 1/2 lb. bacon, diced and cooked until crisp*
3. 1/4 cup thinly sliced spring onions (both the green and the white parts)
4. Assemble above ingredients and combine in a bowl until well mixed, set aside. 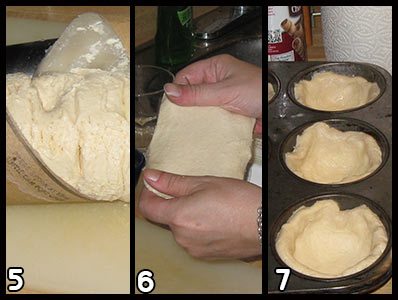 5. Open the tinned biscuits and let them come to nearly room temperature, they are easier to work with.
6. Take one biscuit and stretch it out gingerly like pizza dough (I tried to be the Proper Chef and use a rolling pin, what a mess, so I channeled my year of slumming as a pizza maker and sussed it out)
7. Fill the muffin cup with the biscuit dough like a crust. It will sink as you work on other things, don't worry, just pull the edges back up and press them against the inside of the muffin cup and "will" it to stay. 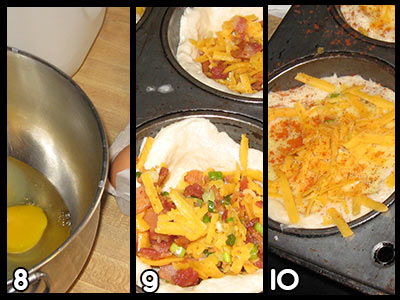 8. In a medium bowl, combine four eggs, 1/3 cup of milk (the higher the fat content, the better, but this will work with skim if need be), seasonings to taste (Pro Tip: a pinch of nutmeg makes a world of difference, even in a savory quiche, but just a wee pinch), and whisk quite vigorously for three minutes.
9. Grab that bowl of cheesy, bacony goodness you put aside and fill each cup loosely with that filling.
10. Using a ladle, pour egg mixture over filling in each cup to the top of the biscuit dough, if it goes above, no problem, you greased the cups. Garnish with more cheese and a sprinkle of paprika and bake for approximately 35 minutes. 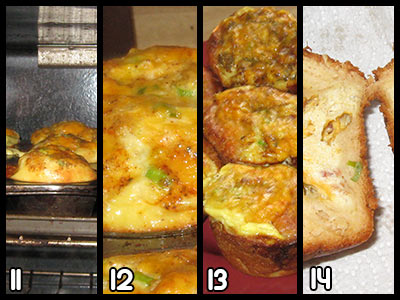 11. When the timer goes off, grab he camera and gather everyone round to capture thr glory before the quiches cool off and flatten out. When they expand like this, they are done.
12. The center will not be at all wiggly, the biscuit dough will be golden brown and the cheese on top will just be a caramelized part of things now. Take them out of the oven. Don't forget to turn the oven off!
13. Lay out nicely on a plate, notice they have flattened out as they have cooled, this is a bummer, but it's normal. This recipe yeilds as many as there are biscuits.
14. When cut open, everything should be solid. If you used extra flaky biscuits, they will still be ind of flaky, but mostly moist, as they absorbed some of the egg mixture as they baked.

That's it! You're done! Eat those suckers!

* About bacon: Turkey bacon may be substituted. To dice bacon before cooking, cut the package in half without opening it, put half of the package away for another time, pull out the slices of bacon from the other half of the package in one lump and put them on the cutting board, with the slices still "stacked" cut across the strips every 1/2", add to hot pan and separate pieces by stirring while the bacon cooks. When it's cooked, viola! You have bacon bits.

** About "healthy alternative substitutions": I don't recommend them, unless I mention them specifically. I design my recipes to be the kings of comfort food, messing about with that will mess about with the flavors and textures and experience of the food. Don't do it, just go find another recipe, or live it up for a day. Thanks.

***About Other Substitutions: Go for it. Add some veg, change up the cheese, go wild. I tried to give you approximate proportions so you have some leeway with your creativity and taste. Spinach and Feta is good, broccoli and cheddar, ham and Swiss, knock yourself out!