I have a modest collection of trashy t-shirts. Most of them started out white. Most of them are men's undershirts that I love because they are so soft (threadbare). I wear them to art in. And to clean in. And to sleep in. One of them has even absorbed the live vibrations of the Ramones, I've held onto it that long. I think one of them has been inspired by Henry Rollins. Doc hates them, but tolerates them because I don't wear them out of the house. If I did, I think he would have a problem with it.

I was hanging up the laundry yesterday, and it was a load of rags. In the bottom of the basket was one of my favorite trashy t-shirts (what am I saying, they are all my favorites). Half of it was splotched with uneven and rather interesting mildew stains. It had just gone through the washer twice. So I hung it to dry, and when Doc got home, staked my claim to it, and asked him to get me a lot of black tea. He said he thought I didn't like black tea (which, to be fair, I don't). I said, I didn't, I needed to dye a t-shirt. Then I explained to him the t-shirt I found and the stains and my dying technique that my mom had taught me. She used to use it to age muslin and other cotton fabrics that were just too bright for her quilting projects. I've always done it on clothes.

This is what I did: 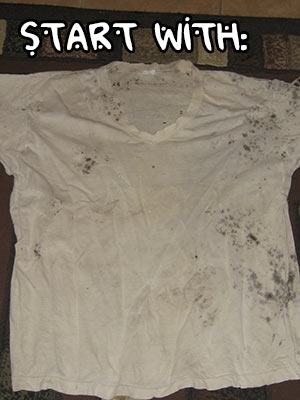 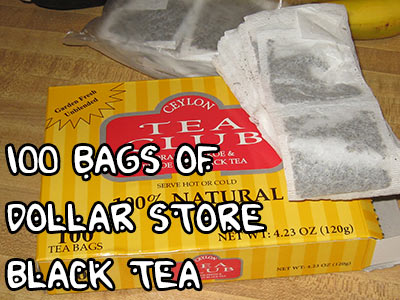 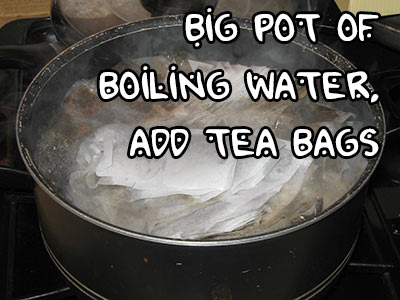 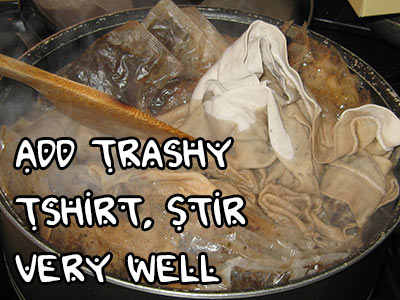 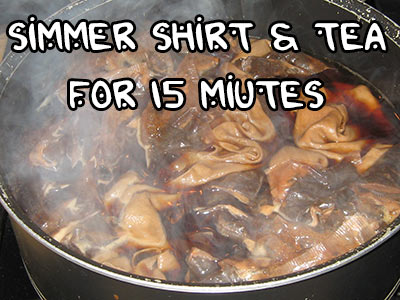 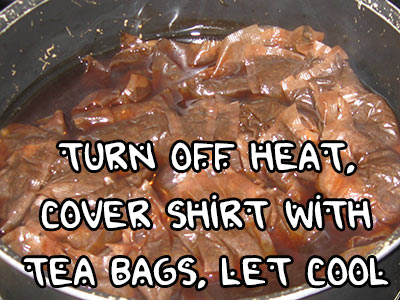 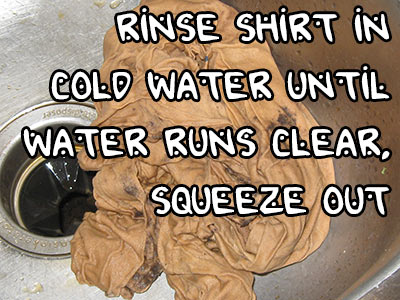 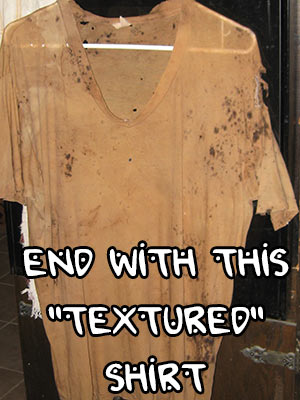 And, instead of throwing the thick black left-over tea out, I put it in a big ol' mason jar and a spritzer bottle (ProTip: get some of that spray on body scent from the dollar store and then empty it out and use the bottle as an art spritzer, better than any empty bottle you can buy and the stuff inside of it is shite anyway - the dollar store is an artists/crafters best friend), to use to antique card stock.

Wow, did I just make my first tutorial? Maybe Punk Rock Handicrafts will feature some tutorials for stuff I don't plan to sell. And tips and hacks, like my treasure trove of dollar store hacks.

So, that's what I did tonight. Now I'm going to go create some colorized line drawings of the cats. They will be posted later exclusively on Circus Catimus on Facebook and @circuscatimus on Twitter.

A bit of a brunch tidbit, it's called Trailer Park Quiche. Don't worry, I took pictures and will put up a recipe/tutorial later. Something tells me I am running out of energy. It's been a couple of days since I slept longer than an hour and a half. I have so much to do.

I antiqued a few pages of card stock today and printed out tag patterns on them. I'm going to cut them out, punch holes, reinforce them and string them and sell them in packs of a dozen or so to scrapbookers. I will also include a couple in the Smash Book ephemera packages. Another thing upcycled. I was worried about that card stock. I got it just to make custom cards for Doc's mom (which she completely does not appreciate), so I have used three pieces of it on her, and had the rest of the ream. Now I am making the Xmas cards with it, and the tags, and I will likely make and sell thank you cards/envelope sets to sell on PRH.

And yes, I am going to put a cooking section on PRH. Punk Rock Chefing. With a disclaimer: I use wheat flour, whole eggs, milk/cream, butter, aged cheese, pork bacon and other completely yummy but politically incorrect ingredients in my recipes, this is comfort food. You have been warned. Substituting ingredients for something "better" or more "wholesome" will affect the taste (I will allow for turkey bacon in place of pork bacon), and I can't be held responsible for whatever monstrosity you come up with after trying to make a roux with margarine and soy flour. Take a chance, follow the recipe. Enjoy the meal. Walk an extra trip around the block with the dog tomorrow, it will be fine.

That should cover it and keep the gluten-free vegan hoards off my back.

I got all the aux alien skin stained and cured and sealed, now I just need to cover the backboards with it. I'm spacing things out so I'm always busy, but not overwhelmed.

Don't forget to email me your name and mailing addy for a unique Xmas art card. xmas@zenweb.net. EVERYONE. I HAVE NO ADDYS FROM PAST YEARS, THEY ALL GOT LOST IN THE DATA CRASH THIS SPRING. So, get on it. Subject line "card" or "xmas" or "i'm in" or "i'm down with that" or some other positive thing that will jump out a me in the sea of design emails. I'm putting a limit of a hundred on this, and will stop collecting addys sometime before Thanksgiving. It's FREE ART. I'm really into this project, so you would be helping me out to develop my technique I'm using for this and expand my creative experience. Plus I don't ever get to do anything nice for you guys, with all you do for me. Let me give back what I can. Do me this favor. Please.
Collapse