I can't testify as to what Doc knows, or thinks he knows. He cleared his browser history before asking me, "Do you have any burns that I should be concerned about?"

"I just have this burn on my hand from the oven," and I pointed it out to him as it dawned on me that he was talking about what I had done to my legs. But he let it go.

"Oh, okay." He went back to making his pre-bed drink.

He still hasn't gone through the albums, so I guess I'm folding paper for the magazine bowl.

I found my heat gun, so now I can mix the two wax techniques I just learned on one canvas. I may do it on glass. I did an ink painting on glass yesterday. I'll post it soon, I'm letting the Patreon peoples get first crack at it. Which reminds me that I need to get a high res photo of it up there. I put a low res version up last night, I had to wait for sun up to get a proper picture of it. It was still hard, and I don't know how I'm going to get a printable photo of it for Fine Art America. The ink being semi-translucent and the glass being frosted, but also semi-translucent. It will take some time and some rigging of furniture and the purest white thing of drapery I can find. Fun Fact: It's called "Stigma Runs." It's my first experiment with ink.

I'm going to do a transfer thing for cheap prints. I have all of this transparency film that I can't use in my printer, so I can use that as the ink canvas, do the drawing, then the treatment, and then, very very quickly, press card stock to it to transfer the ink pattern to the card stock. Suitable for framing. Hand signed. Maybe numbered. Art I can do with stuff that I have. I'm all about up-cycling and reusing and using up what I have right now. And the ideas are coming in huge, tsunami-like waves. Again, Notepad++ saves my ass. I have to condense all of the notes into one "binder" folder on an external hard drive soon.

5 more days of Latuda. Then about 36 hours grace period as it leaves my system. *sigh*

Doc tried to buy me a bra today, but recognized at the last minute that it was the wrong cup size. A peace offering.

I'm looking for a big gesture. Go to the dollar store to get Halloween stuff before they sell out, like you promised; and go to the thrift store and get me the thing I need for the albums and start the search for the frame I need for a decoration for my room, like you promised. The spray paint and sealer will be at WallyWorld for pick-up in two days. Need that frame, and it's going to take more than one trip to find it. I know from thrift stores, ornate frames, even in questionable condition, are hard to come by. I have no problem doing everything up to rebuilding it. I rebuilt Doc's chair. It doesn't count that he came right behind me and fixed it himself. My bolts and screws have stayed in place, his have not.

Or, just look through the albums and designate a round bowl that I can use to mold them with.

I think I'll use the rest of my pony beads, instead of making another bowl, to make xmas ornaments. I have a tree and a rather large dove. I could make 3-5 doves and hang them from the ceiling in the vestibule. That would be festive. The hole poking is going to be a challenge. I have a nice enough awl, but it's a matter of getting it through the ornament in time to make a clear hole, and get the ornament out of the cookie cutter in time. I like a challenge.

Doc has been thinking about getting one of those cooking subscription things for me. Where they deliver the food and you cook it and eat it and clean up after it. I am four square against that. The food they show in the commercials is so far away from comfort food, it's like a plastic Eams couch, if he made a couch. And comfort food is all I'll eat.

I surrendered the garlic cheese pull apart French bread to Doc and am going to make a loaf for myself. I cut the first one wrong, so I didn't add it to my Pinterest Wins, yet. This next loaf will do it for me, though.

Oh! Great news! Doc is asleep right now and the news is on and I am typing frantically! He's in his room! Not being spoken to for 18 hours apparently got the message through. He also removed ALL the clothes from the comfy chair. Progress in behaviour, if not attitude. Now I have the day to myself. I have my cargo shorts off, so they are not rubbing against my thighs. I have the burns bandaged. I slathered them with Neosporin and taped gauze on before Doc got home and put my cargo shorts on to cover them. But the shorts rub against them at all times, moving the gauze that isn't covered with tape around. I've never hurt myself here before, I'm not sure what to expect on the pain spectrum. I notice when I stand up, blood rushes there and almost puts me on the floor. That took a bit of getting used to. The rest of it is cosmetic. No more mini-skirts. I wonder where Bernadette on "Big Bang Theory" gets her tights. I don't know if you've noticed, but she always wears short, full skirts and very opaque tights. I wonder if they are all wool. That wouldn't do at all. I could just keep wearing jeans, it's done me for 43 years. 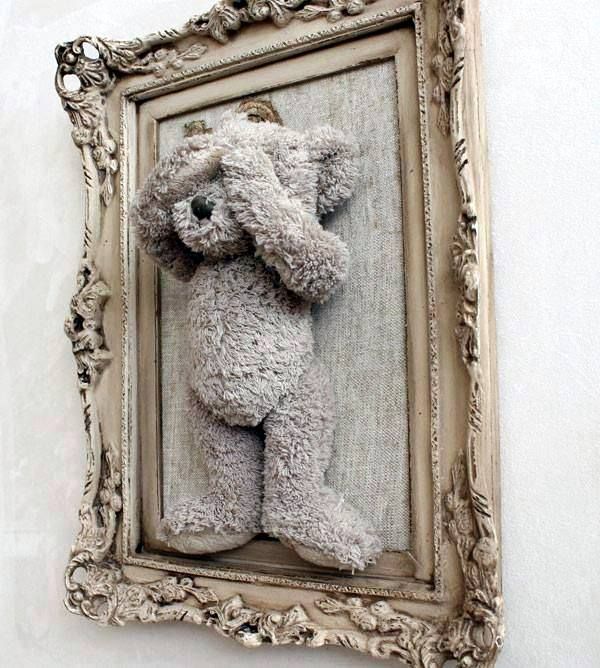 I've spoken recently of a teddy bear I have that I don't like, as teddy bears go, but it has sentimental value to me; and of an ornate frame, in less than perfect condition; and black spray paint. The picture above is the inspiration for my madness. A few differences, because I am not into copying things exactly. It will be black. The bear is black, and I prefer black, so it shall be black. I also think I have some textured black fabric to cover the back board of the frame that the bear will be attached to. I have ordered silver foil, and will apply it randomly around the frame, to add some sparkle, everything in my room needs to have a bit of sparkle, because black. I am also surfing around looking for a swing, or a stool that I can attach to the backboard because the bear is in a sitting position. So, something simple and light. I could probably get a scrap of wood from Home Depot and drill a few holes and string some twine through it and make the swing myself, everything I find online is far too complicated. I just need something to support the butt of the bear. Yeah, I'll make one myself. That way I don't have to measure and order and wait and alter and shit. There's no rush, as I have also mentioned, the frame is going to be the hardest thing to come up with. Even crap frames of similar style and complexity in design are over $50 on ebay, plus shipping. That is way out of range of what I am willing to pay.

I'm going to start collecting those bags of random toys from the Dollar Store. Cowboys, soldiers, dinosaurs, zoo animals. Turns out if you cover an ugly, plain frame with those and then spray paint the whole thing the same color, it looks amazeballs.

I've decided when I re-do my site, I'm going to open up a store on it. Just a small affair, with ever changing things I make. And sometimes art or photography packs. But I've thought about it for a couple of years now, and selling off-site isn't doing it for me. The only people that buy from me are people who know me. Best to keep it all centralized. It would be better if I could control the steering of the "customer", or Patron, as I think of people who buy my art and handicrafts. It's going to involve learning the tiniest bit of code, but I'm sure I can handle it.

Doc announced today, as if I knew very well, that we ARE getting the Latuda refilled at the end of the week. We had a kind of soft-spoken blow-up and I ended up showing him my legs out of spite (all bandaged up) and he demanded an explanation. So I told him that his rage yesterday had triggered the thing that had happened between us a couple of years ago where I got hurt. He said, yeah, well, I was making him feel like he was living with his mother. So apparently me being his mother trumps the "r" word. Now I know where I stand. I was just supposed to get over it. Good to know it didn't affect him to add a new descriptor to his personality.

So, I think with our new "sleeping in our own rooms" arrangement, instead of sleeping on our own couches in the living room and being around each other all the time, we will have much needed time away from each other. I know that I need time away from him. I'm really fucked up right now. Yes, the Latuda is working fine, thank the Universe I have it, because otherwise I'd be dead. I am so completely immersed in the crisis feeling. I keep pushing it down and down, and then I'm doing something an hour later and I realize that I am crying. It doesn't always hit you when it happens. Sometimes it takes a while for it to get through the firewalls and encryption in your brain to get in and release the malware.

His supervisor at work confirmed his claim that springy steel scrubby things leave marks in glass bowls. Those things fuck up metal, plastic, and now glass. Who the fuck invented these things and what are they meant to be used for? Since everything I was ever taught about them is apparently wrong.

And I am no longer allowed to use the kitchen bowls in the melting of anything not food. Doc didn't realize that I had used them years ago to make record bowls, he thought I was using a metal bowl (much easier to scratch up, BTW) as a double boiler sort of thing or something. The process he described to me might work in an alternate universe, but wouldn't according to our laws of physics. He had no idea at all. So now I can't melt anything until he buys me nesting bowls. At a thrift store. A complete set of nesting mixing bowls. I will never melt anything again. He even got bent about using the custard cup to melt the CDs, though I was using the OUTside of the custard cup. Rarr! 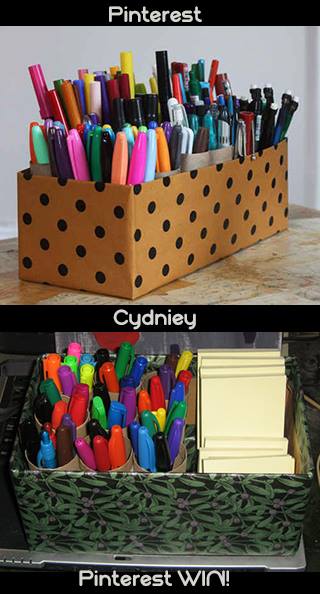 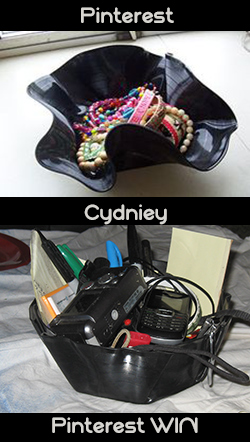 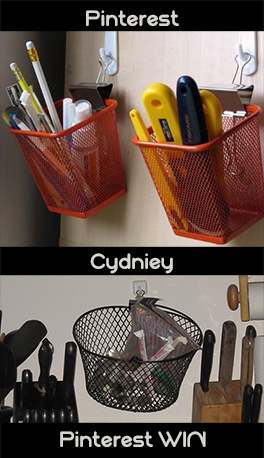 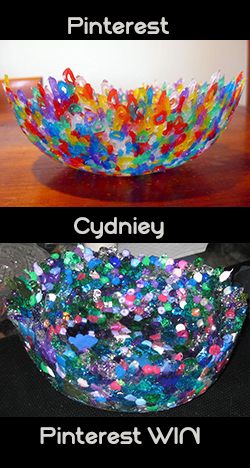