I could not wait for Doc to leave, essentially from the time he got home this morning. Lucky for him, he was asleep. He told me as he was leaving tonight that he had food poisoning. That explains his foul mood and oversleeping. I had made him a large salad, so I'm glad I did that for him to eat at work.

Tomorrow I am sending him to the thrift store for a loaf pan and a large, ornate frame in questionable condition. I showed him on Pinterest the idea that sparked my need for this frame. It's a way of keeping a teddy bear that a treasured ex-girlfriend gave me. It's an awful bear. Completely banal. Red ribbon round its neck with white hearts painted on, and it is holding a small white bag (the bear is black, its one redeeming quality) with a smaller bear inside the bag and "Be Mine" printed in garish red letters on the shiny bag. For the project, we get rid of the bag, and the ribbon and color his red nose black and maybe apply some lacquer to it. Once it is undressed and all black, and the frame and back board are painted black, I will mount the bear in the center of the back board for a 3 dimensional, monochromatic piece of room decoration. I think I'm also going to apply silver leaf to the frame in random places to add some bright-shiny. It really depends upon the frame. Doc inquired as to how he was meant to get the large frame from Epic Thrift (how can we NOT shop there?) back home on his bike. I said, "Round your neck? If you get hassled by the cops, you can say you're being framed, who could pass that up?" He was not amused. That's hw I knew he was feeling out of sorts.

I asked him for a couple of fresh single edged razor blades today to fit in the "scraper" part of my box cutter, I need to scrape paint off of CDs, don't ask, you'll see. He declined and went to sleep. So I figured I would just use the one really dull blade I had in the cutter, but it wasn't where I left it. It wasn't in my tool box (yes, I have my own, am I your dream girl, or what?), and it wasn't in either of his tool boxes. It wasn't on my art table, underneath all the stuff that was on my other art table. It was gone. He hid it on me. He must have done. When I was doing really badly three weeks ago before I started Latuda, he must have hidden the blades. All of the refill blades were gone from his dresser, too. He did leave me a dull ass utility knife, but that won't do the paint scraping I need, just open boxes and cut things up. Plus he left me my circular blades, and I imagine that nothing would be more convenient for one than using one of those to slice one's wrists or throat. They are the least used and therefore, most sharp blades that we have. Oh, and in looking high and low for a hidden razor blade, I noticed he had taken all the erasers and pencils with erasers away (my favorite of mutilation used to be giving myself deep friction burns with the erasers, deep ugly scars).

I want crumpets and clotted cream. I should look up the grocer and see if they carry crumpets, and then look up a recipe for clotted cream and see what I need from the grocer for it. 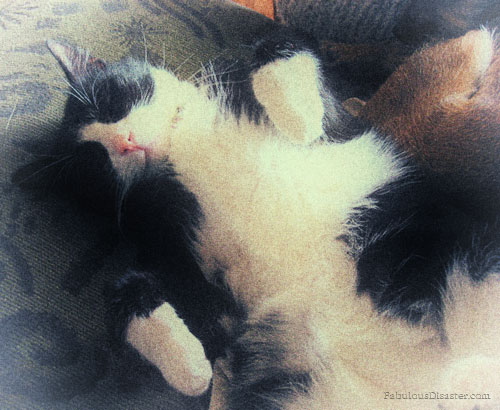 So there is this lovely woman. She has been an ardent emotional and psychological and culinary support to me for well over a decade now. Recently, she became a Patreon Patron, upping the ante, as it were. I was really touched. I'm touched by all of my Patrons, they are all considered my friends. But this woman, and I am not going to name her, because I don't want to embarrass her, today, put money in my PayPal account so I could grab some art supplies on clearance at Michael's online without upsetting the balance I have with my check and my bills. I think Madonna put it best, "I'm not religious, but I feel so moved, makes me want to pray, pray you'll always be here." I mean, how much more can she do for me? She mails me Girl Scout cookies because Doc won't buy them for me (he's got issues with the Girl Scouts that I've never delved into). She gave me my most used kitchen pan that isn't a saute pan, a quiche pan. No other pan works as hard as that quiche pan. And how can I convince her that her emotional support is the thing I most treasure about her? The cash is nice, I'm shallow, I'll say it. And each bit of cash for supplies that I get, justifies to Doc that my being an artist/writer/photographer is somehow worth it. So it makes life easier here. And when I do make money, he's usually willing to match it. He's so proud of me that he will actually take out of his savings and match it. And it wasn't even me, it was this wonderful, gorgeous, brilliant woman. I love you wonderful, gorgeous, brilliant woman. *smooch*

Time to make Doc stop recycling plastic grocery bags so I have some packing material for xmas. Shipping is going to be a bitch, but there are only going to be so many people on my gift list, and the gifts will all pretty much be made for free and serve to clear out space in the studio. Things I have been saving for years . . . the upcycling crowd has finally gotten around to them and shown me brilliant things that I can make better. The one thing I am avoiding is xmas ornaments, I have more than enough of those. I'm concentrating on things you can fill vases with, as we have a million of them, and store things in, and larger decorations. A lot of pine cones are going to get a make over. I've been saving what the Big Pie Tree in the back yard has been dropping, and I have many of various sizes. Glitter and paint with snazz them up a little and I will fill bowls with them and stick silk poinsettias in with them. More fun for the cats to knock down. I'm still missing several pine cones from a couple of years ago. I believe they are under the couch. I think Boomer is hoarding them.

The coordination of social media graphics is going well. Instead of a uniform design, which was logistically impossible because different areas are invisible on different devices and are different sizes, I took 3 graphic elements: 3 photos of open journals (mine), a microphone (stock), and a webcam (stock); messed with each of them in Photoshop so they blended with my color choices (black with white and mere hints of color), and 2 specialized fonts. With these things, I have been making graphic banners/headers that are all connected. They all have the same elements. The logo, "fabulous disaster" is done with the same effect in each, but that is the only thing that is the same. Each shows different bits of my journal pages, different journals, the mic and cam at different angles, positions, sizes. It is amazing the variety you can get out of 5 style elements. And they are all reminiscent of each other. Enough that you will recognize when you are on a site of mine, but not so much that you get tired of the same image over and over again. The user icon is the weeping angel, and it's funny, each social media interface chooses a different way to crop the image, so there are differences in those, as well, just way more subtle. 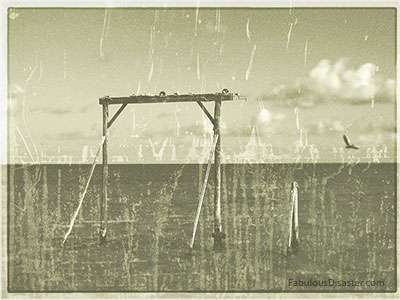 I put on my skill-set on Dribble, Design Coordination. Because that is what I am doing.

I also started work on the Circus Catimus headers. I did FB, just need to do Twitter and Youtube now. I'm using 2 design elements; the first is a posterized close-up of a catnip garden with the plants turned shades of lilac, and the second is an image of two mousie cat toys which just happen to be our cats' toys of choice. And I think, one font. Stylized paws with letters in the middle, with heavy effects applied. Much more simple. But Circus Catimus is pretty simple. no hidden meaning there. Nothing to convey with the images. Even if people don't get that the purple plants are catnip, no harm, no foul. The image I was using before was a manipulated image I didn't have the rights to. So I had to remedy that. And I hate the way that computers display greens, so changing the color of the catnip just kind of happened during the processing.
Collapse