I just wrote the most awesome script for a video I'm making for my Patreon Patrons. And I mean for Patrons. This is a special request. And it is totally off the map of what I may have had in mind. It is a fabulous distraction, and I'm having oodles of fun with it. As well I should. Dammit. But I never would have thought of it on my own. I've got good Patrons. Come and be one! http://patreon.com/cydniey_buffers $1 a month. There are also a few open posts up there. One with a snap shot video of me painting, set to music. And more coming. I've got materials to do a lot of stuff. And the interaction that Patreon allows for is really great. A goal of mine is to get a bunch of Patrons who talk to each other and find commonalities. Like Amanda Palmer's Patrons. I'm not looking for the big funding she's got, but the people, in the zone.

I've given up on communicating with Doc for the rest of the weekend. I'll be going to bed when this is done, and he will be in bed when I get up tomorrow. So I won't have to talk to him until I wake him up, and then he won't notice that I'm not talking to him. Then he will go to work. And I will be able to get the house clean. Except the kitchen. He's got paper towels all over the kitchen and I'm not touching them. Not a one. I will clean up everything in the kitchen but that. And he won't even notice. It will look just fine to him. He's cut back on his Xanax to almost none a day, instead of making an appointment with my doctor. He is making me crazy-er. He says now that I pause too long in between my sentences for him to pay attention when I am talking. So the brief second that I take to get my words into a sentence before I say them is too long for him? FUCK HIM.

I swear to god. Being a dick about my cognitive deficits, which I am working really hard on reducing in every way that I consciously can, is listed NO-where as being helpful. Yelling at me, or sighing at me, or mocking me (especially that) does not make my mind work better. It flusters me and makes everything worse. Why does he do it? Constantly. Every time I talk to him. Why? And I have been very good at starting at the beginning of stories, he just never listens to the first line of anything I say, so he always misses it and ends up yelling at me halfway through what I'm saying that I need to start at the beginning, even though that is what I did. And he always insists that I didn't. And I have to give in because I'm the one that is crazy.

Or today, when I told him I was going outside to smoke so I could cool down when I came in. And he told me a shower would do that. I told him, not in my experience. It was great when I got out of the shower and was wet in the cold air, but by the time I had my clothes on, I was sweating again. And he starts yelling shut up and no you don't. And I told him to shut up and asked him what the fuck made him think he knew what my experience was? He had never been inside my body, what the fuck did he know? And there was no reason for him to be like that. No reason at all. It's not even shower day.

He finally stopped making me scrub my teeth every night. I kept telling him that every time I did, one of my teeth would break. He told me, no it didn't. So I started bringing out the pieces of tooth to show him. And he stopped insisting. Which is nice because I had almost completely lost my ability to chew. It's touch and go, now. Nothing chewy or crunchy. And I keep cutting my tongue open on the remaining shards. But I won't get the rest pulled. Not as long as I have a top and bottom molar that meet to keep my lips from being smooshed together.

Argh. I'm done for the night. Tomorrow I will wade through new and old pictures and video footage and maybe make some more, and make some graphics and find some free music. The music has to be just right. It will make or break the video. So I will give myself plenty of time to surf the site I use.

I also wanted to Photoshop a photo of my kitchen floor with Smurfs all over it, so everyone can see what I can see. I'll do that when I'm done with the video tomorrow. 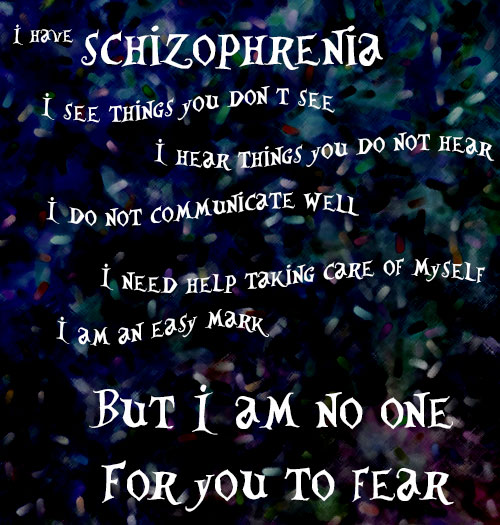 A little meme I made the other day for no particular reason.

Okay, almost set. Did the logistics of my bed/recording studio. I need a board (got it) and three milk crates. Thought of piling books, but no, I need to be able to have the vents of the laptop open because it overheats if you look at it funny. Two crates go on the board, I'm not sure where on the bed yet, with the laptop on top of them. The laptop has the camera. The mic has a five foot cord, so it doesn't need to be close to the laptop. It goes on the third milk crate, in front of me, a foot and a half away. All I have to do now is set up the shot. What do I want behind me? My bookshelf filled with vintage science fiction? My treasure shelves with the mirrored back? I might be able to do a really subtle reflection shot using that. Or there is the burgundy plaid wall. Or the Tigger and Pooh wall. Or the burgundy plain wall (that isn't a wall at all, it's just a sheet stapled to the ceiling). The most important aspect of the shot, as I have mentioned time and again is that the camera is facing my profile, right side. With my hair straightened, clean and combed straight down. As far as what I will wear . . . maybe one of the new wife-beater tanks that Doc got for me today.

I've been trying to hint to him about the whole me and gender fluidity and asexuality and such, and he's either denying it, or . . . I don't know. Not intentionally. I want a few pair of cotton boxer briefs, to wear as underwear. I have had it with women's panties. We have a washer now, 6 pair will do me, added to the two pair of boyish underwear I already have. Doc has gotten them in size 44 (I'm a 34-36), so they would be baggy shorts on me, I rejected them. Today he got me loose boxer type, with a button fly instead of pouch (i could really care less about a fly I'll never use) and long, loose legs. I finally had to say to him, I want them as unders. I can't take panties anymore. And I feel more comfortable in boy clothes. He took it for what it was and said he'd return the ones he brought home today, and look for boxer briefs in colors I will like when he goes to pick up my new headphones at the big giant WallyWorld. We don't really talk about sex. That's not really covered by the umbrella of our vows. I bring him girlfriends.

What I mean is, "experimentals" are drawn to me. I leave them unsatisfied, they turn to Doc. Drinks are had, I am in the other room coding, bad movies are watched, deep conversations are had, they hook up. No harm, no foul. Every one is always honest about it, or so obvious that they assume I know, when I really have no clue. I am so wrapped up in my own bubble. I find out later, and react with some sort of interest, which seems required of me. Things work. He's found a few girls on his own, but they all sucked and used him and teased him and were general cunts. That kind of thing, I object to. If he had time to date, I would be shoving him out the door. He needs to get laid. Of course I won't say that to him, but baby, it's true. From one friend to another, find some booty.

Oh, hey, I just found my $50 (in 1998) Radio Shack sound mixing board. Think of the most simplistic, stripped down, just sliders compact board, you are right on it. It even has all of the cords and adapters with it. I don't need it for anything, but will happily add it to my inventory of technological things I have and may in the future need.

Christopher Earner, over on Facespace, is trying to upgrade to Windows 10 (well, he has, at this point, completed the upgrade and is now fucking with it) so we don't have to. I have come to the conclusion that there is no way in hell I am trying to put that monster on this laptop. It will melt all over the table and drip 1's and 0's all over the floor and get into the carpet, and there is no getting binary out of a low shag. A Berber, maybe, but you're right fucked with a shag.
Collapse