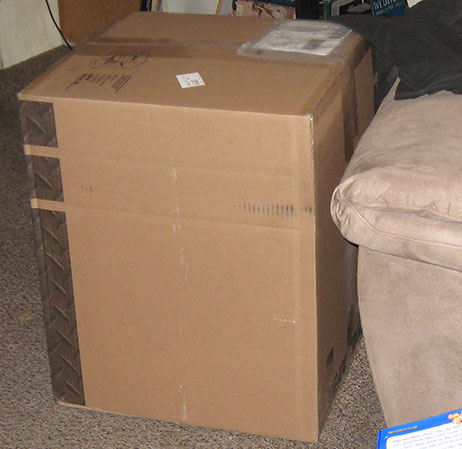 Jaysus (thank you to

wastededucation, what did you send me? A Dalek?

This is the box I just received from my long-suffering Technology Patron, who has kept me going and equipped and online to harass all of you, lo these many years. I cannot open it right now because Doc is asleep right over there --->. So I have been practicing impulse control for the last two hours. It took me ten minutes to get it into the house. I can't wait to open it and dive in. What if it is a Dalek? It will go well with the washing machine that we call the Tardis, because it is bigger on the inside.

I just got a brilliant and thoughtful and open and honest reply to the patron-only post I made, and I'm sitting here with tears of happiness streaming down my face. This Patreon thing was the best idea, but only because of the people who are making that way for me. I'm going to do a high res picture for them tonight, I think. I got two nice raw photos of the sunsets this week, maybe I can mold one into something.

I downloaded some firmware for my one camera that makes it more DSLR-y. It gives me the option to bracket pictures, which I don't quite understand how to do yet, but it's a process used to make HDR photos. I also have control over my shutter speed now, and F-stops. I just have to learn how to use it. It puts a bunch of clutter on my screen. But I don't have to have it active. I press a button when I turn on the camera to activate the firmware. So I don't have to mess with it if I don't need to. It's nifty as all get out and it was free. The result of an open source hacking project to see how far they could take the built-in firmware in the camera. I don't even remember how I found it. I get so many links sent to me now, all of a sudden. I think my invisibility is wearing off.

Clammr is not doing for me what I had hoped it would. I'm not giving up on it, don't get me wrong, it is a new app and will take time to build an audience. But they aren't advertising at all, from what I have seen. They have no active Twitter or Facebook presence. They seem to be relying on content producers like me to bring their audience with them. I told the rep when we spoke that I don't really have an audience, yet. I was assured that Clammr would bring me new fans. I'm getting round three plays a day from Clammr. Not helpful.

I have five promotional companies following me on Twitter right now. I'm only interested in one, a local brick and mortar that I believe also houses a recording studio. I am interested in getting them interested in me. I'm not about to hit Craigslist looking for a band, I would rather be hooked up through an agent/promo/talent scene.

Five more minutes until the initial waking of Doc. I may have to put off opening the Box until after he leaves at 7.
Collapse