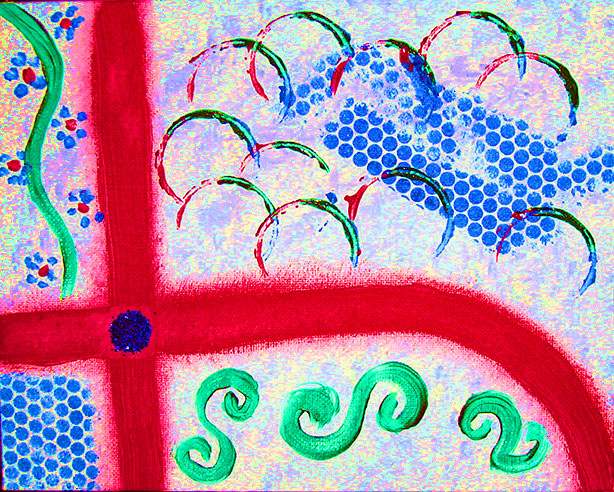 This is the painting that I painted on cam tonight. It's from this hallucination I've been having. This character in it, this Joan of Arc-type, was wearing it on her chest as a flag on the tunic over her armor. It's been haunting me, even when she is not around, so I thought I'd paint it. It's watercolor, acrylic and glitter where a jewel was. Two fields were never clear to me, so I improvised. 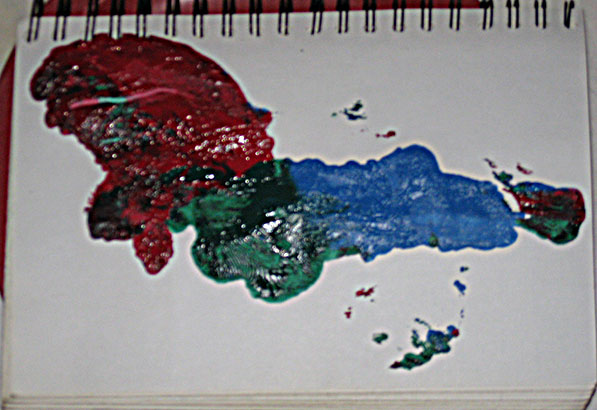 This is the palette pressing. I make one in the nearest art journal whenever I paint. It usually says more about my mood than the actual paintings do. That's why I started saving them.

So . . . that's what I did tonight. Tomorrow I will go through the images from the cam and pick out the good ones to make a video of me making the painting without my head obscuring the frame. At that point, I will also decided what to put behind it. I want to do a reading of something fun. Like Jabberwocky (I don't know that I'm quite up to that task), you get the idea. I wish I had my mom's Big Book of Neil Simon Plays. Oh, the monologues! Hilarious readings. It was full of them. I suppose I could find some of my old faves online somewhere.

Once the video is done, I will post it on my Patreon site, along with a high res version of the painting and the pressing as an example of things I create. And the video as a tease for the live web cam art making, which will end up as a reward for third and fourth tier patrons (and you guys) from Patreon. First and second tiers get the video and second tier gets a high res photo of the completed piece. Somehow. I'm working that out.

Boomer does that thing . . . that quintessential cat thing where they open their eyes in defcom 5 panic mode and look at absolutely nothing like Jesus himself is descending on a flaming Vespa with Audrey Hepburn on the back. She does this often when she isn't getting attention. then she plays The Floor Is Lava and climbs under my couch. I have come to the conclusion that Boomer is a Very Strange Cat.

Male comedians who aren't particularly attractive: The Fluffy Full-Neck Beard doesn't help your cause. No, not at all.

Okay, so there is another reason I don't like Comedy Central. I don't talk about it because it could be so much worse. They have their moments. they at least try to play "Blazing Saddles". They have to edit it all to shit, but they try. It's a classic movie that I wish everyone could see. And understand the place where the humor comes from. The place of absolute mockery and satire. But those of us with basic cable can no longer be trusted with such things.

I have paint on my hands. It feels good. I don't even know how it got there, my brushes are like 8' long.

I tink my cable just got shut off. Three days early. I feel a pout coming on.

Here's a fun fact: you can learn more about me with a Google search than you can with a paid background search. I was a little surprised that both my birth name and my name name are completely off the grid. Nada, nothing. No past addys or phone numbers, no possible relatives, nothing. I told Doc about it and he didn't seem surprised. I could also swear I could see him with just the faintest smile. I love his extended family. They are fun. Well, no, they are deadly serious people, with Very Important Jobs that I know nothing about. But for me, they are fun. Now, even when Evil Man (as we will from now on refer to my rapist/father of my adopted child) bothers to look at who has checked out his linkedin page and sees my name, if he does a Google, he will find my web presence, but he won't find any private information about me.

Both domains are owned by ZenWeb Media, and if they do refer back to a human, it is Doc, and there is no finding him. Not online, not off. Everything leads back to him, as a matter of fact. Since I was declared less-than-human by the US Govt. I am protected under a very cool umbrella.

So there should be no ill effects from my doing my little investigation last week. Nigel is safe, I am safe. Evil Man has his own life and his own son now and his own set of lies. All is well and good. And if Nigel ever comes looking for me, he will never find Evil Man. That's the way I wanted it. And now that I know that's how it is, a huge weight is lifted off of me. I feel so free.

I hate the picture I painted last night. I don't know if it's an aesthetic thing or if it's because it was a part of a recurring hallucination. My feelings about it are conflicted. In many ways, I hate how juvenile my art is. It's embarrassing to me. My use of bold colors against muted ones screams "no training", but I have had training. I just don't follow the rules. I create what I see. Especially if others can't see it. I guess that has value in itself. Maybe I'll make another one just for fun tonight. Get the iron out and destroy some crayons to make an alien landscape.
Collapse