I woke up cough-screaming at 3:30am. I didn't fight it and just got up and got dressed and took my meds. I made a fresh pot of coffee and changed into my sleeveless black flannel shirt.

Doc will get home around 6:30am. He will piss around outside and make something to eat. Then he will sit down and struggle to stay awake while playing on the computer. If he gives in to sleep, he will make some excuse and a vague promise to take me to the doctor when he wakes up in the late afternoon. Why always so complicated? This is a big red flag, he no longer cares about my well-being.

Tell the doctor about the hallucinations. So, what, he can take me off Seroquel and put me on some really harmful drug, or some drug that turns me into a zombie? Is that really what Doc wants? Just an excuse to get me out of here and into a group living situation.

Maybe that's what all this is about. He's washing his hands of me, it's just slow going because I am the motor oil in his callouses.

The harder I try, at ANYthing, I fail, or I fail to do it right.

Some one remind me the point, again? 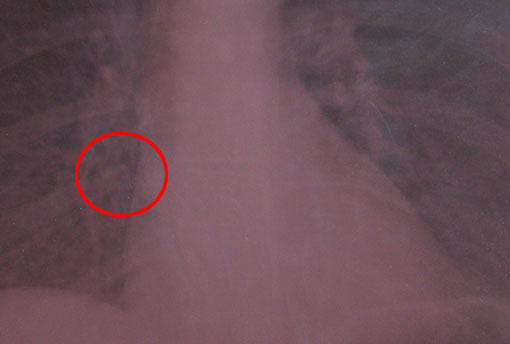 The good news: I didn't break a rib.

The bad news: I broke a rib off.

And I have bronchitis, nearing walking pneumonia (I have fluid building in my lungs, but not enough yet to warrant a pneumonia diagnosis.

And my colon is so swollen with gas and such that it is pushing my left lung upwards and crushing it. That would be a side-effect of the Seroquel that I thought I was managing, I guess not. I am now living on a diet of Metamucil Capsules and copious amounts of water.

I am a Very Sick Person. I can't have cough suppressant because, even though it makes me scream, I must</> cough up everything that I can. I got an injection of something called. "Z Pack", an antibiotic combination made to knock out the bronchitis in a few days with follow up tablets.

I can't have narcotics because they will exacerbate the colon issue, and Urgent Cares can no longer prescribe narcotics. If I still had a soul, I would totally trade it for some Vicodin.

I have to go to an Orthopedist post haste to get this fixed. And I was talking to Kelli, who was looking at the xray through the miracle of Facebook, and she wondered, how would they fix that, they would have to go in and set it, maybe with a pin? GO IN?!?! Wait, what? Open me the fuck up? No no no no no no no no. We have no money. I can't have surgery. I can't even pay the lab fees for a bone density test, which they will do on a 45 year old woman who can sneeze and break a rib off its mooring.

Doc and I are not speaking. Because I would not speak my mind with the doctor in the room. I'm intimidated. He said he was going to make me tell the doctor I was unhappy and I burst into tears, with little screams between sobs. So he went out and voiced my concerns to the doctor. Then he stopped speaking to me. All the way home in the big-ass truck, he yelled at me. Like he's been doing all week. Taking especial pleasure in repeating that I am literally full of shit.

Kelli says his behaviour the past couple of weeks is really out of character for him. I agree. He's blaming me for everything. He is mismanaging his time and not getting anything done and using me as his scapegoat. Once in a while, sure, he gets burnt out. But this is becoming a pattern of borderline psychological abuse.

I tweeted this sometime in the last 18 hours: He's washing his hands of me, it's just slow going because I am the motor oil in his callouses. (BTW - I consider this among my top ten cleverest tweets and it was roundly ignored, it's a wonderful and deep play on words that makes you stop and think a minute and puts a picture in your head - WTF is wrong with people?) Doc saw it and was not amused. He got all nasty about it and said I did twitter wrong in it because there were no links or hashtags or meaning, it was just some stupid thought I had. He knows nothing about twitter except what I read him, which are usually nothing but people's stupid thoughts. He was just mad. I think I hit too close to home with that one. I just want to know what is going on with him. He needs to talk to someone. A professional. I think the Medicaid/SNAP denial was the last straw. The last avenue I had of bringing a bit more income (for food, SNAP) into the house. And he's just given up on me and doesn't know what to do next.

Just as I fear being labeled Treatment Resistant, he seems to be pushing me towards it. Knowing that I can't stay here and be on a TRS regimen. I need to be long term inpatient in a facility with a lab or near a lab. He has threatened to talk to my doctor. I'm terrified he will tell my doctor about this place, and then I will be right fucked.

Now I have to go search hard drives and thumb drives for the login to his HR site so I can find a bloody Orthopedist to try and get an emergency appointment for whenever it is convenient for Doc. This time, I just know he's going to make me walk/take the bus.

That's all I have to say. Oh, I'm terrified of the immediate future. In case that needed saying.

The antibiotic, brand price for a 6 day treatment is $3,300. That is not a typo. Generic? $1.97. That is not a typo. How does the pharmaceutical industry get away with this? Doc will not be getting up in time to get my scripts to the pharmacy tonight. He won't even get up in time to go to the store and get me something to eat. He's been pushing the minute rice on me. But I eat white rice with shredded cheddar cheese and lots of butter. I'm no nutritionist, but I don't think that's going to be any good for my colon. Fast food is right out. I'd make red beans and rice, but I can't stand up for the 25 minutes it needs to be simmered and stirred.

How did I get this sick? How did I not know that I had bronchitis? Am I that out of touch with my body? And the colon thing. If it's pushing on my lung, you'd think I would notice something, anything different. And the rib thing is hitting home. I was just "take some Vicodin and it will mend in a few weeks," but no, that's wrong, isn't it? The xray shows that. It's going to need to be reconnected manually, as it's just hanging out there. People, I don't mean to alarm anyone, but shit just got real.

I guess I have to get a lawyer for the DHS hearing, seeing as how I will be flat on my stomach very soon for who knows how long. This is bad. This is very very bad. I'm freaking out here.

I'm not just saying that, this isn't an anxiety attack. I am disconnecting from myself and control of said self. I can feel myself pulling away from my body, backing away, shaking my ethereal head back and forth, no no no no no, this is not happening to me. Put me in the psych hospital, fine. I will do as much time there as you want. But put me in a hospital where I have to lay in bed all day and get help to pee and have tubes coming out of my very veiny hands and people coming at me with scalpels, no no no no. This is more than I can handle.

No, there has been enough in my life. I can't take any more.

And you just know that Doc, if he ever wakes up, is going to have plenty to say about how I don't take care of myself and see what happens. WHAT?!?!?! I fucking sneezed! Then I had a coughing fit. Because I went out in a 60mph dust storm to close the window on HIS truck that HE left open, and was in too much pain himself with a muscle pull to go out and close himself. If anything, this is his fucking fault. If you want to get petty about it. And I'm ready to, by god. He's yelled at me enough this week. He is going to lay off while this is happening.

If I end up going into surgery strapped to the fucking bed because I'm a basket case I will find a way to stab him.

So meanwhile, the ten minute breathing therapy thing I did with a nebulizer at the Urgent Care has worn off and I'm wheezing again and trying SO hard not to cough. I coughed on the phone with Kelli and she heard the whole cough/scream thing I was talking about. A while later I choked on my water and coughed a little but suppressed it, and she begged me not to cough again. They prescribed me nebulizer ampules and an inhaler.

Oh shit . . . coughing fit. that one was bad. i didn't even cough up the stuff, it's still in there. fuck fuck fuck. It hurt in the front that time. bad. poking into the lung.

so yeah. there's that. it woke doc up enough to ask if i needed his inhaler but not enough to keep him awake for the answer. so there's that, too. yeah, i wait on him hand and foot when he is sick. i don't sleep, i don't rest. i cater to him. i make him food. hell, i spend a tense hour every night trying to wake him up for work. and then another hour running back to his room to hurry him along and find out what he needs packed into his rucksack. of course there are the things he always forgets and i have to remember for him, and if i don't, i hear about it in the morning in accusing tones. mother fucker, you're 45, get the fuck up. i do it because i love him and because he spends his income trying to keep me alive. times like this, i wonder about my own devotion, though. he should be up comforting me. kelli did what she could for two hours on the phone today. it's his turn.

it didn't even occur to me until just now to do a search on disconnected ribs. i'm going to go do that. as i burp up metamucil tablets and huge amounts of water. god, can't i just have some ex-lax or correctol or some shit that will just blast my colon out in a few hours? why do i have to do it with this huge amount of belching gas, it's just going to swell my colon more. i swear, doc doesn't think sometimes before his pushes his ideas on me.
Collapse