Pop Quiz: There are a number of cats passed out on my patio and around my house. What is the relative temperature? Yes, hot. Not very hot. But hot enough for them to be babies about it. It's as if they have forgotten summer, just as they had forgotten "winter". God, their lives are one betrayal from nature to another, no wonder they are atheists.

A winner! The Pretenders, "Talk of the Town" a classic. Didn't even know it was on this thumb drive. Chrissie Hynde is on my list of female musicians I wish were my mom. My mom could have been cool, if she weren't batshit insane. I saw flashes of it through my life. Sometimes, her manic phases involved "getting in touch with her sick biological child", me. Trips to the movies, or ice skating, or out to a nice dinner, or sometimes shopping, she loved to go thrifting with me. I had her touch for fabrics and could scan a rack for the good stuff in no time. Trips up the freeway a bit to Disneyland. But those times were rare. Most times she couldn't stand me because I reminded her how old she was and how sick she really was. And later, how closeted she was. I wonder if she ever got over that.

Okay, I'm getting into a certain groove here with the music.

I have found over the last few days, about 200 pieces of "fan" mail. Maybe a bit more, maybe a bit less. I haven't read any of it. It's too painful to think of what my breakdown cost me in the 00s. I don't want to remember what I had and threw away on a few hits of meth. That is all it took to destroy my life, a few hits of meth. I'm thinking of opening that part of my lj up to everyone, not just friends.

I was on my way, doing it slowly. But I couldn't stop myself partying, I thought I was invincible. I had spent years on speed, with hardly any effect on me. But I couldn't handle my high on meth. But what I really couldn't handle was the coming down. That's where I lost it. It's all written down. I should read that, too.

And now? Now I'm positively terrified of taking chances. For example, I'm having problems signing up for that Clammr app through the web portal, and I'm actually afraid to email my contact with them to ask for help.

Afraid to go to the poetry readings around town alone. In case I get booed off the stage, though that has never come close to happening. I was told to do something happy once, but never booed.

I'm a rock star in my head. From the 80's. Used up, it feels. My charisma ran out. I had an audience and I pissed them away. And you people are the precious stars that didn't burn out on my crazy and still light my way at night. 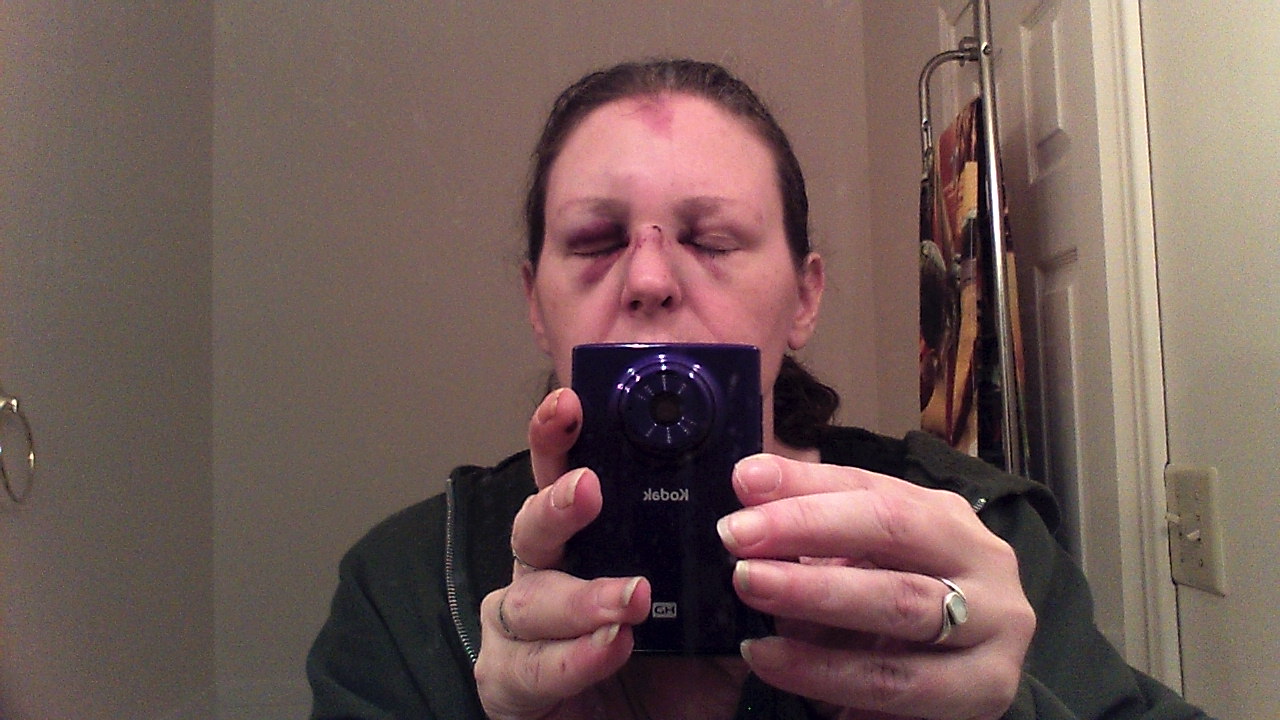 That was the night I drank a half a fifth of vodka in around three hours. and trashed the kitchen, lost a chunk out of the back of my head, hair and all, almost broke my elbow and I think, dislocated my shoulder. I seem to remember the pain of Doc putting it back in. There is a scar in the wall near the top of the ceiling from that night. And a crack in the ceramic tile. I have no idea why I did it, I remember almost nothing. So when people ask if I really need a Care Giver, I think back to the Meth Breakdown and the Vodka Night and vigorously nod my head.

Oh, here's something better to look at. I don't own any makeup, but when I did, I did things like this: 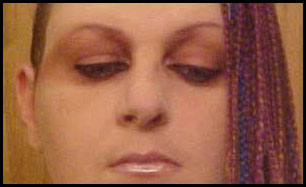 Yes, that's me in makeup. When I went to the poetry slam in 2013 with that slag that stayed here, she insisted on doing my makeup, and made me look like a colorblind whore. I looked ridiculous that night. I like my job better. Blue eye shadow should only be used by Drag Queens and professionals.

I'm really stressed out about something right now. Kelli's sister got a new job and had to move to the center of their state to take it. She took her two youngest kids, leaving the older kids with her husband. She's never been away from the family, who has provided child care at the drop of the hat. She now has to find that on her own. Kelli is on vacation right now, and instead of coming out here, she understandably went to her sister's to help her get settled in. I am really afraid that Kelli is going to move out to be with and help her sister raise the kids. Kelli loves those kids.

I'm selfishly scared that she is going to choose her sister over me. How's that for being a first class lout? I should be concerned with what Kelli wants. It's not all about me. None of it is about me. It is about Kellli and her family. Just because I don't have the same concerns with mine, doesn't mean I get to discount her experiences. And I'm trying not to. I just get so scared. Doc is broaching the subject of Group Home. And he's making it sound like he gets someone to help him with me, or "life as you know it will change, you won't be able to live here anymore."

Try living under that threat. Over things that you literally cannot control. When you're trying your best. When you are med compliant. When you are living under constant fear and paranoia and trying not to let it show, lest it make things worse. The most hope I can offer him is that in France they have found ways of stopping cognitive symptoms in mice. Of course it involves being hooked up to a cumbersome machine at this point in the research and they are about a decade away from human trials. Or a pill.

I want to cry. But I don't have emotional showings like that. I don't cry. I rarely laugh. I don't open my mouth wide when I talk because I am self-conscious about my teeth. I display no emotion but fear. Oh, and anger. I display that pretty well. But how far apart are fear and anger, really? In my experience, not very.

Yeah, I don't want to be schizophrenic anymore. It's getting worse with age, not better. And I have, according to statistics, Alzheimer's and early death to look forward to. So we're at the fun part, where I still know who I am. And who Doc is. And who is going to take care of me then? A state run, Medicare covered home for the hopeless. How can I make this not my future, when it is my genes that take me on this course?

And before I lose it altogether, I want to know who the fuck gave me Mono at age 9. That's a little early to be labeled the Family Slut, but that was me. I must have been kissing every boy I saw. I liked one boy at age 9. And he had his friends hold me against a wall while he beat me up. So, not so much with the kissing. I was a germaphobe, so no sharing of drinks or food. But there I was, in fourth grade with Mono. It took up much of the year. My family traveled with me, leaving me in hotel rooms across America because I "wasn't strong enough to go out". I stole so much stationary. All of my school notes the next year were all on hotel stationary.

Is this getting long? Or, at 1300 words, have I passed that point by now? I'm lonely. No one to talk to but the cats, and they just do not get my sarcasm.
Collapse