Last week was a fluke, I'm willing to admit that. A couple of warm days with a few winter-like 50's and 60's thrown in. But I can feel it, this time it's real. Spring is here. The trees were bare for about four to six weeks. They are all budding now. Holy allergies, Zyrtec Man.

I woke up at 8 and Doc was home and asleep. Looks like he's going with the new schedule. Cool.

Felix and I are best of friends. We have been since we first met, he in my bathroom cabinet, me sitting on the floor trying to make him feel safe. When he finally came out of that cabinet, it was me that he came to. He's always on my lap, or in line to be on my lap whenever he's not out roaming. If he's out when I walk the dog, he will walk with us. We are BFF's. Except when it is time for sleep. Then we are mortal enemies. He has claimed my legs as his own territory. When I move them, he whines and growls, and sometimes digs his claws into my legs.

Yesterday during my nap, Doc was awake and saw me, in my sleep, punt Felix over the arm of the couch, onto the end table. And damned if he didn't get right back up on my legs. When I get up in the morning, he bitchily gets up and waits for me to sit up, then climbs on my lap. So, I'm trying to stretch and stand, and there is this purring mass in my lap. So I put him to the side on the couch and continue my stretch, by the time i am done, he is back on my lap. So I stand up. He clings to my jeans with his claws as far as he can before he drops to the floor and gives up the lap.

Daily, we go through this. Daily. If i take a nap, twice a day. They own me. Shhhh, I think they are listening. Meowssad.

I have $9 for the next ten days. I think I am just going to let it sit there for next month. And transfer the $5 from my paypal acct. to my bank for a little more padding. I have yogurt and cranberry juice, so all girly problems that could pop up are covered. I have food. The cats and the dog have food and treats. The bills are paid. Rent was paid 3 days early. More bills are due Friday, but Doc gets paid Thursday.

By then he will be back on his mountain bike, taking that and the bus to work. He got himself a gym membership. I don't know when he's going to use it, but I have to find a way to support him in it. He is dissatisfied with himself physically (who isn't?). I offered him some jeans that would fit loosely on him, but he's hung up on the size number. I just wanted him to be comfortable when he lounged around the house. He's going to be so sore this week, using the mountain bike after so long. i feel for him.

We might get the scooter back Tuesday. I want to know what has become of the second scooter that B talked Doc into buying as his back up scooter. It's not here for backup while the other is in the shop, so I'm having a pissed. Doc knows I just want to punch B in the throat. I think that's the real reason he won't let B over here. Because I may not win a fight with him, but I've got 50 pounds and 5 inches on him and it would be a mess. Remember the description: Gollum. 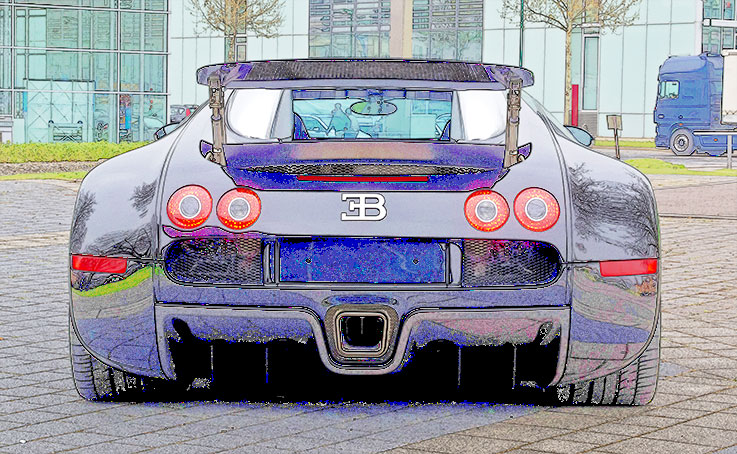 This is the only Veyron pic that returned satisfactory line art, and I think it looks cool. I worked on this one image for about a half an hour, tweaking it. From posting these on twitter, I now have a bunch of car sites following me. Stupider than stupid.