I am the only person I know that can go to sleep perfectly fine and wake up with cracked ribs. I woke up at 5:30 this morning with my usual backache from the couch and being old, and a new pain. Stabbing, middle of the right side of my ribcage. I chalked it up to being old and the couch. But by the time Doc got home an hour later, I couldn't breathe deeply, it hurt so bad. He asked if I was coughing a lot last night. I said I didn't think so, but I couldn't remember. As the morning wore on, the pain started to radiate up to my collarbone. That was it, i knew it was at least one cracked rib.

Doc had already taken his sleeper meds, so I can't go to the doctor today. If it's this bad tomorrow, I may go to urgent Care to get a script for anti-inflammatories, and I wouldn't say no to some pain medication, but I won't ask for it. Last time this happened, two years ago, they gave me gobs of Vicodin. That was a fun spring.

Stupid ribs. Harry Reid is a better man than me, being able to dismiss his cracked ribs as unimportant. It fucking hurts, man.

Before he went to sleep, Doc made me take to OTC sleeper pills so I would lay down and sleep all afternoon instead up being up smoking. But those pills don't affect me. And I don't particularly want to lay down.

Did I mention that the touchpad on the drone computer is working? So I can continue the diary scanning while the mouse is on this machine.

In the wake of the DOJ report, how can Ferguson PD still be claiming not to be racist? I don't understand, this isn't a movie, there is no suspension of disbelief. These people need to be told about national press coverage and the internet. I don't think they realize that the whole world can see them and hear them. I really don't. Because who would be that stupid? Besides Congress, I mean.

45 minutes with the heating pad and the pain is gone! Pulled muscle. Wow, have I turned into a baby with regards to pain.

And Major may not be my cord chewer, it may be Boomer. Still, one of my cats. Well, one of Doc's has started spraying where Lelu used to lay on the counter. Ruined a perfectly good box of Earl Grey.

No pain means that I will be able to take Chewy for a walk today. Doc meant for me to lay down until 6. Not gonna happen. I am going to do the dozen or so litter boxes we have. Really, there are two in the mudroom, one in my room, one outside of Doc's room at the end of the hallway, and one in the spare room. I keep my bathroom closed off now, so there is no longer one in there. And of course the random peeing has stopped with Lelu's passing. She managed to get near the litter boxes, but that was as far as she got sometimes. I wish I'd have known about kitty dementia earlier, then I would have known what we were dealing with. I'd say for the last two years, at least, of her life.

I still haven't taken the stuff and the box her ashes are in out of the mesh bag they sent it home in. I just can't. The shrine is getting crowded. Four cats. Doc said no more cats. He can't go through this again anytime soon. I agree. He said, but maybe a dog. I don't know how serious he was about that, but all dogs over a year old are only $40 (instead of the normal $180) at the Animal Foundation this weekend, and they do have a few cute pups that aren't Chi's or Pitbulls. It's not that I have anything against them, it's just that they tend to have behavioral issues that aren't immediately apparent in a shelter environment that I don't want to deal with. And I don't want anything as big as a Pitbull. I want something little like Chewy that I can pick up if I need to.

Boomer is sitting next to me, cleaning herself, and occasionally leaning over and trying to take a bite out of the heating pad. It isn't on, but that still isn't a good habit to have. Silly bad kitty.

Felix has been up my nose the past few days. I don't know what it is. Boomer was on my lap the other day and he climbed right up with her. She didn't make a fuss and they both lay there for about a half an hour. Now he is constantly on me or with me. If I go outside and I don't take him, he sits at the door and stares at me. In the morning when I give the "get down" command for he and the dog, the dog gets down, but Felix climbs right up me until he's in my face and growls at me when I put him down. This is how we start our mornings. Right now, if he were pressed any harder against my leg, he would be a part of it.

Boomer and Vader are the only cats that I ever see groom themselves. That's odd. I know Simon does, because he removed all his mattes this past summer. But I've never seen him do anything more than preen his tail.

I got a bunch of twitter hate yesterday from a post I made a month ago. Block block block. When the only retort you can think of in an online environment is "Bring it on", I've really got nothing to say to you. Someone else made lots of false assumptions, and I have no time for that, either. First you have to debunk, then, and only then, can you get to the point, and that never happens. Because they come at you with a new set of false assumptions and it's this big circle. Block block block.

It's been about 13 years since Carter and I spoke. We tried tweeting, but ended up using it to fling snarky one liners at each other, so we just unfollowed each other.

I was just looking through cam pictures, I've never actually been through them all. And I found a picture of him, really good pic, he looked terribly handsome, the way I like to remember him. So I posted it on Twitter for Throw Back Thursday. I didn't name him in the tweet, but I don't know how photo tagged tweets work. If twitter brings it to the attention of the tagged, or what. I'm expecting a "take it down, now" tweet from him any time now.

I didn't do it to piss him off. I did it as a tribute to him. I still don't see why he can't tell me what I did and at least let me know. He doesn't have to let me give excuses. I know what my deal was, I'm fucking crazy and seeing him after all the years of "what if" threw me for a loop, I didn't know how to behave, so I didn't. Je ai été très mauvaise.

Here's the picture. He doesn't come here anymore. He has a life. 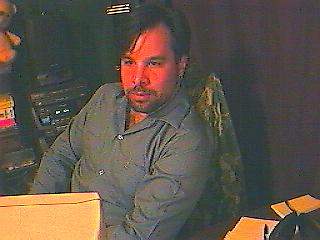 It's flattering, right? I think it is. I guess his reaction, if any, will depend on his mood.

Of the triangle of us from my freshman year of high school in SoCal, he is the most successful. We are all writers. The other two points of the triangle are also fiction writers. I'm not. I went with the artistic. M went with the entrepreneurial approach to being a writer. And Carter writes the hell out of articles for local weeklies and I'm sure does more now that I just don't know about.