Thing One: If you are forced into a relationship with CVS Caremark, guard your medications, especially long-term ones, VERY carefully. Do not let them fuck with you. You are not a sick person, you are a dollar sign, and they will do anything they can to make that dollar sign bigger for themselves. Things like "lose" 90 day scripts and try to force you to pay for 30 day refills that they will not cover. There is a way to get what you need and not go broke, but you must advocate for yourself, no matter what your condition, diabetes, high blood pressure, mental health, whatever. This is not a nice company that cares about you.

Thing Two: I know, for the first time in 14 years, what it feels like to have someone not Doc or Kelli, advocate for me. You may recall, I go through hoops with CVS Caremark every 30 days or so to get whatever med I'm out of. This time it was Cymbalta. And I ran out. And when I went in to see the doctor, I was so messed up that I asked him for a script for Seroquel. I got home and Doc went to the pharmacy and discovered my error. To his credit, he didn't kill me. I started the dreaded phone campaign with my doctor's office to rectify things.

After getting nothing but the run around all day from the CVS pharmacy I go to, and CVS Caremark, my doctor sat down with his assistant to comb over my prescription history and figure out what went wrong. Really long story short, the company was fucking with me to get me to pay cash for a script fill, when there was a 90 day, covered script on file. So one of them, r maybe both, called the pharmacy early this morning and "went off" on the managing pharmacist. As Robin talked to me about the details, I heard the doctor in the background telling her to tell me everything would be okay. Two hours later I had a small brown paper bag full of Cymbalta.

It has taken three hours and five attempts to write the above. My laptop keeps overheating. Go ahead, tell me it's dying, too. That's really all I need to push me over the edge right now.

This month marked the third anniversary of my last trip to the psychiatric hospital. And I am so close to going there now. I'm thinking catatonia might be a life path worth pursuing.

I have the meds in my body now. I have some peace of mind knowing that.

Doc moved me to this house so I could get some peace. The kind I couldn't get in an apartment complex, or even an apartment. But when we lived in the apartment, we had money. I was batshit crazy and miserable. But we had money. Now I have peace. But we're broke all the time. We need a room mate. I don't know how we're going to find someone who can acquiesce to my needs. And they would have to. Or there would be no point living in a house. Hardly a fair thing to ask a stranger.

Hey, I thought we were friends, here. Why did nobody tell me what a great album "American Life" by Madonna, is? I've had it on replay since early yesterday evening.

I'm going to send this before every thing snaps back off again.

Oh, I'm contemplating commting Twittercide. That's where you just don't anymore. I unfollowed a bunch of people, we'll see if that makes the experience less dramatic. I just want to step back from the people, and read the news feeds. I'm kind of feeling over it all.

Ok, I know that some of you out there can actually use an infrared mouse with some kind of precision, or at least with less evidence of a stroke than I can. And you're likely giggling madly at how spoilt I am with my fancy chewed up trackball. But . . . WAH!

There is this cherry car up the street. A Packard Clipper. Yeah, I know, I had never heard of it, either. I always kind of assumed Packard went down in the Depression and didn't bounce back, but I was so wrong. They made it at least into the 60's, even including at one point, a three wheeler, rather bulbous looking thing. They don't seem to have made it to the Muscle Car era. They did sports coupes through the 60's, possibly in the early 70's that were very angular, like young, under developed DeLoreans. Kind of weird. Either European inspired, or maybe an aborted foray into sports cars. I am just going by photos and could be completely wrong. I'm doing my best Jeremy Clarkson here.

One of the reasons I like the Cymbalta is that when you take it, you feel at least a bit of the effects at once, within a few hours. I took a xanax when Doc left, then cleaned the hell out of the house.

I was going to play with my cameras and try to get a new head shot that looked nothing like me. But I ended up having to recharge all my cameras. Ooops. So tomorrow, maybe.

So, I have one of these: 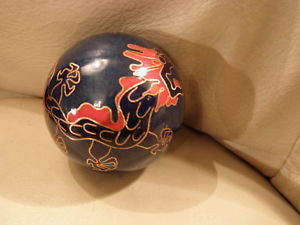 it has chimes inside and hangs on a metal keychain. Attached to that keychain is a weaving of knotted leather with semi-precious gems on wire in the knots. It used to be my therapy thing, that I would hold and play with at the Doctor's office. I discovered two skull bracelets, one of bone, one of wood, a black leather band, a pair of sterling cat earrings, and the therapy thing. All in this cigar box from Dirk Vermin 13 years ago, locked away in my bottom drawer. Yeah, "Bad Ink", that Dirk Vermin. Half his shop used to be an art gallery. I got the box for a many artist show. Everyone transform a cigar box. I kind of lost my shit before that happened. I also showed in a multi-artist Halloween themed show. No one seemed to get my piece and I declared it a piece of shit.

It was a sparkly, glittering collage of the biggest and brighetst of Vegas; covered with spattered blood, cobwebs, psychedelic bugs I made with a Creepy Crawler set from Toys-R-Us, and this big, gaudy, velvet orange ad black door bow like you see in the suburbs with a minivan and a passel of kids. Really, my art is so obvious, it hurts. The bright-shiny, and the grime it brings, then hidden by gentrification and suburbanization. It's gone forever.

End of name-dropping anecdote. Time for a cigarette.

I just sussed something out. In a crowd of people, I am the least likely to talk; but if I do talk, I am most likely to be the center of attention. And not in a bad sorority chick or religious nut way. It's just that if the mood strikes me to talk, it's likely to add some snark or wit to the conversation, and when it happens, I'm always ready to go wit to wit just for entertainment sake. You think I'm sarcastic here, put half a beer in me, or a shot of vodka, and put me in the vicinity of either really stupid people or really clever people. If I'm in the mood, I'll find my way to them.

I don't get invited to parties anymore. One night at a party, my feet were killing me, and there was a chair in a corner of a main room, so I was in the traffic pattern of everything, but I could sit in peace. Had I known the people, I would have sat on the pool table. Well, my siting there alone freaked out the drunken and methed out "hostess" and she had to be distracted while Doc spirited me out of there. I had no idea any of that happened until almost a year later.

So, I guess you could say I helped ruin things for Doc with the Family. But he's the one who told the Good Ol' Gossip Boys that I was ill. And they didn't get why Doc just leave me, it wasn't like we had kids together. They don't get it.

I'm going to bed. I'm having some heavy thoughts. Lots of conflicting things. Own it, own it all. Do I have the strength to keep on owning it? If all the future holds is more futility, can I still stay on my feet? Is there a breaking point that maybe I should be aware of? Is there a point where I am supposed to give up and relax? Am I any of the things I think I am? Or am I really just another grasping, desperate, drama whore? A complete fraud? Yeah, I can't stay awake on these thoughts, my head will start leaking and completely ruin this shirt, and I'm kind of partial to this shirt.
Collapse