okay, I have to not panic about Boomer's hovering over me and growling at any cat that gets near us. She trusts me thus far, I need to hold on to that. She has learned her new name, as we figured she would quickly because it's close to Junior, her old name. She also comes when I call puss-puss-puss. Hmmm. She doesn't growl at Lelu. I wonder if she can sense Lelu is deaf. 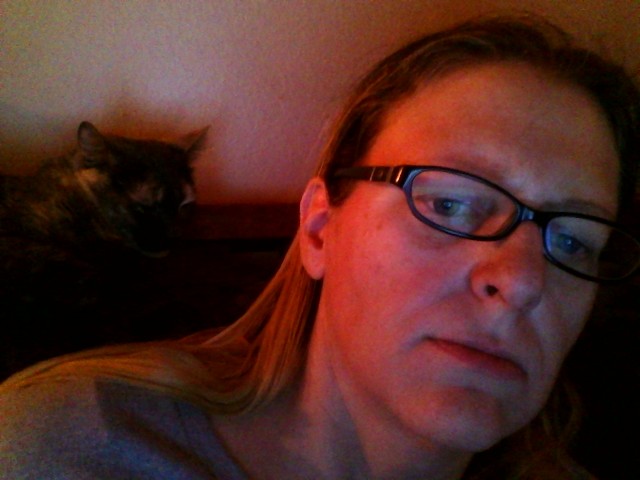 This is us. New Mommy and Kitty. She looks pretty relaxed, doesn't she? She is such a darling.

About the food, I think if we mix the Pro Plan with what we have been feeding them, we can afford it if Lelu and Simon will cooperate and make that their primary food and we can drop the expense and pain of the wet food except as a medication delivery system for Lelu's cosequine.

A commercial came on for stuffies.com tonight, and I excitedly pointed at the TV and got Doc's attention. I am fascinated by these things because each one has 7 hidden compartments/pockets to stash things in. Even though I think that goes against the point of being a stuffed animal - the hugs. And he started fretting about money and overtime and started to stress himself out. And I was just like, hey, I don't actually want one of those things, I just wanted him to see it so he didn't think I was daft when I talked about it. Besides, I had my Xmas present already,(as I stroke Boomer in my lap like a Bond Villain), and maybe a candy thermometer so I could make fudge and candied walnuts this year since I found the recipes.

I want us to have enough money for him to get something for himself. A round ticket home for a week or two . . . a power tool . . . a savings bond . . . he mentioned a membership at the gym, that sounds cool. Whatever he wants. I got a life. He can have anything he wants.

Wow, I've been up a really long time. I should probably take my meds soon.

I have a lot of stuff to go over in my mind. Everything I was taught by my parents about right and wrong and God was a lie. The men that ruled every aspect of my life for most of my life weren't the holy men they purported to be. The cult isn't a church, it's a corporation. My nickels and dimes went to enrich the church, not feed the poor or support the missionaries or the Lamanites. And the Native Americans are not, in fact, descendants of really lost Jews. The founder of the cult was a well known con man. The whole thing is just too terrifying to look at. All of this shit . . . that was thrust upon me, into me, all over me . . . it was all lies. The basis of my moral code has been built in spite of what I was taught because, even at 8, at my own baptism, I knew something was hinkey. There were a lot of things my parents did because of the cult that I wasn't cool with.

And after all this time, I find out, I see the evidence, the history, the documents, the stories, the video that proves I was right. There is something VERY wrong with the Church of Jesus Christ of Latter Day Saints. The LDS. The Mormons. It's leadership is old and addled and evil. And it lies and controls with tales of holy revelation, modern day prophecy. Them that own their wives, and if the Prophet called for it, would own the wives of others, and somehow justify it to the every day members. It is all so wrong. They can't let women into the Priesthood, then they could work their way up to the boardrooms, and the men can't have that. They let the Blacks in, they'll be damned if they will let the women in. That is just going too far.

If women are working up in the corporation, they are going to want schooling for something other than catching a husband. Then their colleges would have to concentrate on real teaching instead of bans on facial hair.

Argh. My mom couldn't or wouldn't answer the hard questions when I came up with them. No one could or would except one seminary teacher. I heard she was later ex-communicated, I don't know why. Maybe her apostasy got the better of her. She told me some truths. Now the church warns members against searching for church history on the internet. Yeah, I'll bet. Exmos are everywhere. And they have also been lied to all their lives. Way more so than me. And they are pissed.

It's only now that I realize my parents were only true mormons when people were looking. some people keep the mask on all the time. that shit's got to eat at you like acid.