So on this last day of the promotion, something made Doc agree to getting me a cat for xmas, a month early. We had a tank full of gas in the big-ass truck and ten dollars in cash. All of our bills are paid, so, other than that, we're broke. But the promotion said "name your own adoption fee". I picked out the cat I wanted online and showed her to Doc. He liked her, I could tell.

So we start out. I, for once, am going on an outing without being stoned. But I do okay, being the good luck charm for the unregistered big-ass truck. We're doing great going through hostile cop territory, Henderson, when we discover we've strayed from our path. Doc figures, the gas tank is full, let's go on the freeway. I'm cool with that, I haven't been on a freeway in years.

We get on and merge and are getting up to speed when the transmission goes out with an ugly noise and a lot of smoke. We pull over to the side and all of a sudden I realize what Doc meant by the razor's edge we live on with no backup. We have no friends to call. B doesn't believe in cars (read: his license has been suspended for DUI so many times, he has to be anti-car, or be depressed all the time). And that's it. We can't call a tow truck. We can't call a cab. We are miles from home and the next or last exit. I start to silently freak out. Doc somehow keeps it together.

We wait for a while, ten minutes, maybe. and he tries to start the truck. it starts right up. he puts it in gear tentatively and starts moving forward along the shoulder. He turns on the hazard lights and through video-game-enhanced dodging and weaving methods, get to our exit for the Adoption center, which this time turned out to be inside a PetSmart. Once we got off the freeway, we were golden.

We got to the adoption center and he sent me in alone. They told me one of the requirements of adoption was spending 20 minutes with the cat, and did I live with anyone? I said yes, my husband, but he was out in the car, which had broken down on the way there and he was really stressed out. The girl suggested I go out and get him, telling me that time with the cat might calm him down. I agreed whole heartedly with her once I met the cat, named Junior. So I went out and got a reluctant Doc.

As soon as he saw her and she cuddled up to him, he melted. We spent the 20 minutes with her and it just flew by. Then I went out and filled out the adoption paperwork and he stayed in with the cat. She has a Google microchip, which means she has GPS tracking capabilities.

On the way home, we took a back road, and made it home in 15 minutes. Doc smacked himself for not taking that way there and sparing us the freeway terror. When we got home, I examined the stains on the cardboard under the truck and discovered it wasn't oil, as doc though, but transmission fluid. So the big-ass truck needs an infusion. And never to be on the freeway again. It's more of a surface street vehicle, anyway. It gets better gas mileage on the surface streets. And it's more intimidating when not competing with Semis. 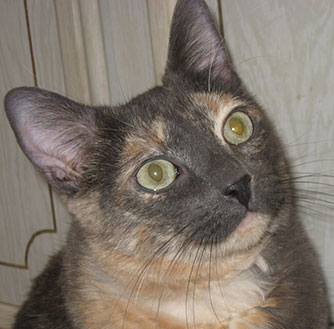 So is this a Scout Finch, or a Boo Radley? I voted for Veyron (as in Bugatti), but that sounds too much like Vader so it got nixed. Doc is coming up with girlie names. Aside from suggesting Mike Brown. I also suggested Lambo for the bright green Lamborghini I saw on the way home. Astin, as in Astin Martin, sounds too much like Ashton, so that was also nixed. Doc mentioned Daphne, but didn't seem to like it much. I kind of do, but I'm really attached to Scout or Boo.

I finally relented and agreed to have B tool around the transmission of the big-ass truck and see if there was anything wrong other than low fluid. I had originally said no way no how because I ride in it. But I have to recognize that when B puts his mind to a project, he does it really well and he is a good mechanic. He just can't hold a job because he is unstable, not because he can't do the job. And he has wanted to dig into the big-ass truck since Doc bought it from S a couple of years ago.

So there is this nameless cat in my bathroom binge eating. She's been in a cage since the beginning of October. She was surrendered by her owner because said owner had too many cats. I learned today about a "Fancier's License" the county offers for those with more than three cats. So I'm going to get us one of those. Then all of our babies will be legal. She is an absolute doll. I've always wanted a calico, but they can be weird. She doesn't seem to be too weird. But then she is confined to the bathroom right now. Once she gets out with the other cats and Chewy is when we'll get to know her idiosyncrasies.

They gave us a choice of two toys out of a grab bag of frankly rather expensive toys. I picked one for Chewy since he likes cat toys and one that was a bunch of smaller toys on one placard. those will be for the cats. They also gave us a big bag of food to mix in with what we feed ours, so her stomach can go through an easy transition from one to the other.

It was damn near impossible to get a picture of her. She wouldn't hold still long enough for me to take a picture without a flash, so I had to go with the flash and wait for her to look slightly away from the camera to avoid full on laser eyes. She is a beautiful grey and orange and tan.

The sniffing at the bathroom door has begun. That's the whole point, let everyone get their scents sniffed before face to fur meeting.

Jesus, I can't believe how lucky we were on the freeway today. For the big-ass truck to start right back up and drive like nothing had happened . . . if I believed in miracles . . .

Doc was really impressed that I kept my shit together. I am, too. Especially considering I was convinced he was going to beat the shit out of me in the truck when the tranny gave out. He's never touched me in anger, but at that moment I wouldn't have blamed him, I really wouldn't have. But Doc is known to everyone as the guy who keeps his head in the midst of chaos. That's his super power. When everyone else is losing their shit, Doc is sitting and thinking and figuring out a way to get to the next point.

We really do live on the edge. If anything unforseen happens, we're fucked, and not just a little bit. Raped right up the ass is what we would be. We live paycheck to SSDI check. We pay our bills and rent on time, and that's about it. We can afford to feed and care for all the animals, but god help us if one of them needs to go to the vet. New Cat has gum disease from being fed only soft food. Well, now she's on an all crunchy food diet, and I have a toothbrushing kit I can use on her. Her breath is nowhere near as bad as Simon's, so I'm not too worried about it.

Doc went to the Farm the other day. Our crop is only a few weeks from harvest. That was fast. We have three times as many plants there than we did last time. None of them died off this time. And once that crop is harvested, we have another set of plants ready to go into bloom. And we have a new strain to introduce with the next crop. Doc's friend owed him some money, so he gave him an OG clone that is growing gangbusters. If we can get some clones off of that in the coming weeks, we can get some variety.

Okay, I am typing too loudly and it's waking him up. I'm going to close this out.
Collapse