Simon ate today. A lot. And he's drinking. He's also spending most of his time out of his sick room. But his tongue is still hanging out and he is still covered in drool. but the emergency phase is over. this isn't stopping him from eating, so, we can take a couple of days to get him treated. I was thinking about trying to get him to rinse with some anti-bacterial mouthwash. towel, duct tape, syrnige with no needle, mouthwash. Doc. I need Doc for it and he's out for hours. getting parts for the broken truck and going over to B's so he can get his scooter bike tuned up. He's on the verge of taking the bus and his mountain bike to work again. that only adds an hour and a half to his commute.

I'm feeling ranty. The truck being out of commission is making me tense. And makes me ask the question, how long have those two bolts been missing? the whole time we had it, and just now that last remaining bolt got loose? it's an '85 GMC, but the bolt is metric. why? what is going on? But truck won't go without its belts running. so truck must be fixed. scooter bike must be tuned. it doesn't like to start. it stalls out. what is going on? fix it.

And then there's Simon and my campaign to get a $40 pit bull mix which I really shouldn't be on. Simon is acting like there's nothing wrong. He goes out and roams the yard, climbs the wall, climbs the tree. He stalks the house. He plays "the floor is lava" and trips along the furniture around the room. Since Doc got him to eat this morning, I stopped completely freaking out about him.

I have so many calls to make monday. a whole two. i HATE calling people. I have to call the dentist for an estimate on tooth extraction and a penicillin renewal. Then call the vet and get an estimate and hope to god they don't hold it against him that he was feral and they will sedate him and treat him well. I don't want any one getting hurt. Not Simon, not our fabulous vet.

Lord, the news is so damn grim. Ebola, New bombings in Iraq, war in the Middle East. I'm missing the political antics, frankly. 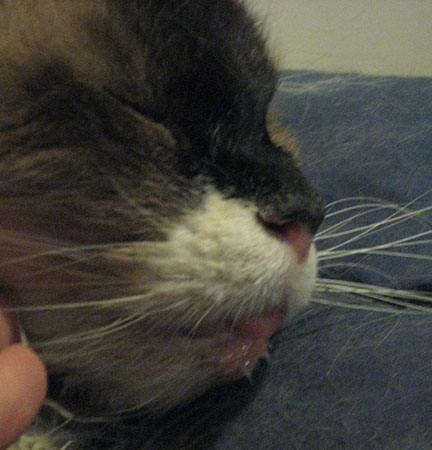 Simon's tongue is almost in today.

I have to go work on the indiegogo site. There is so much to read, they provide tips and such, plus have a large how-to section. I'm thinking of creating a premium: a framed 4x6 picture of Simon. I have a coupon for 101 free prints. I can get frames at the dollar store, so then there's just postage. I wonder if this in any way could count as media mail. It would be for a $10 donation or bigger, that's the only way the postage would be feasible and still have left over money for the bill. I can even put a message on the back of the photos.

Doc is just leaving this up to me. This and my dentist. And in both cases I'm doing everything I can to take care of things without asking him for money. But I've already conned my dentist into billing me for my first visit, I can't do it a second time. And I am doing all I can for Simon. But i've come to the point where I need money and he knows it. So he's thrown up the screen of broken truck and dying scooter. And I'm supposed to either choose or understand that his things are more important than my things. And I can't talk to him about it, but I can be snotty all the time over it, which I'm doing quite well. :(

I don't like being left alone with responsibility. I thought I signed all of that away when I agreed to the guardianship. I thought that meant I would always have help with this shit.