http://twitpic.com/e4ahxx: Brian Setzer, Punk Rock Stray Cat. Isn't he beautiful? Look at that scowl, it's just delicious. and that is him looking friendly because he's hungry. he was so good. he showed up while i was out smoking and i admonished him for always showing up when i don't have my camera. then i asked him if i could go in and get my camera without him running away. he meowed, and i took that as a yes. so i went in and got my cam and got two great shots of him.

i have a picture of my cake from last night, but it's on doc's phone. so i'll get it later and post it. it had little plastic flowers on it with frosting leaves and chocolate icing. we covered it with candles and even put on a question mark candle that Kelli sent me last year. then we texted it to Kelli and i forgot to have doc email it to me so i have my own copy. damn phones.

all of my daisies have sprouted, in three days! the marigolds still haven't started to sprout. maybe planting them together was a bad idea, but it was an experiment i wanted to try. and all of my radishes have sprouted. i'm waiting on the squash and wax beans to sprout. i've kept them moist, so i'm thinking they are just slower to sprout. the cilantro sprouts are starting to take on their shape.

i thought i would resent the plants. you know, something else to do every day. i resent the animals sometimes because taking care of them is a daily thing (where it wasn't with just three cats). but i don't. and i'm starting to resent the cats less. i'm starting to enjoy having projects to do, things to keep me busy. the highlights of my day include playing with my plants and making sure they are all doing well. one of my other joys is the animals. no matter the work. litter boxes aren't fun, but it's for my babies. 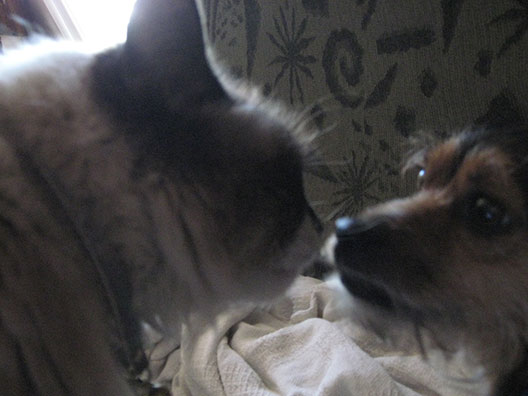 i was trying to get a "selfie" of Simon and he leaned over and kissed Chewy. 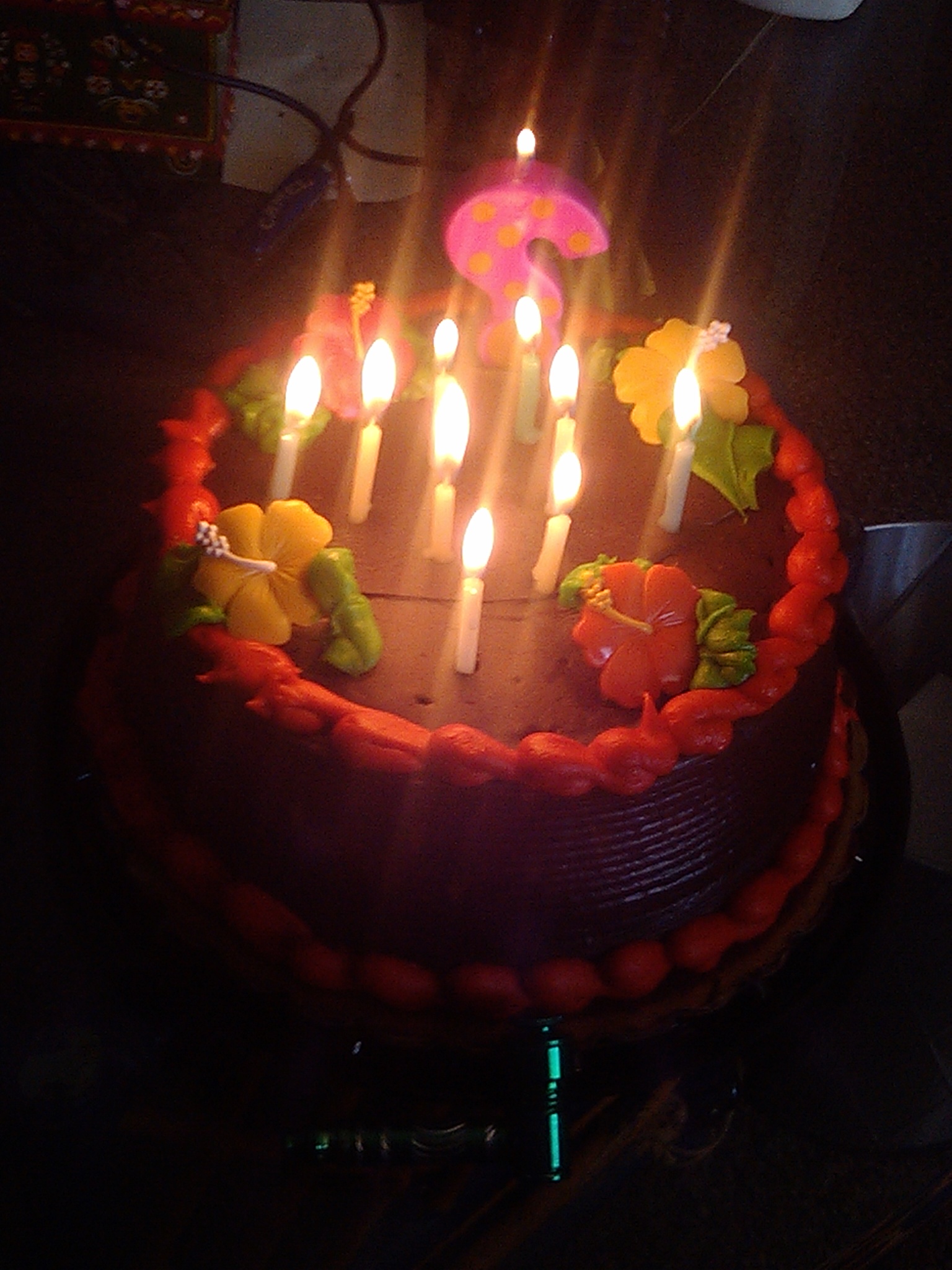 cilantro by week. only two entries, but wow, the difference. http://imgur.com/a/ZSUpR#1

we went to the thrift store. it's called Epic Thrift. It is epic. I found two pair of jeans, one black, one blue, both skinny. doc found a Barbara Streisand vinyl and a couch. i didn't like the couch. it was beige, too easy to get dirty. but he really liked it and it was comfortable, even though there isn't enough room to stretch out like the one we have now. but it was only $40 and really clean and in good shape. that was a low price for that piece.

one of my wax beans is sprouting! he's still bent into the dirt, but part of him is sticking up out of the soil. he got extra water today.

i got a duster for my birthday today from amazon. so tomorrow i can celebrate my birthday by dusting the house. yay. nothing like useful gifts. i guess that's part of getting older. bright shiny is no longer to be mine, dusters and couches and jeans. i sound so ungrateful, and i'm not. i'm just in a bad mood. i'll get over it. the couch is really much prettier than anything we have. i think that's what i'm most worried about. it won't go with our junk theme.

it's 8:30. three hours until i wake doc up. i have half a bowl of resin and a half a bottle of RC Cola. and no cigarettes stuffed. i need to get my shit together if i'm going to stay awake tonight.

A Knight's Tale is on until 9, then it's intervention until 11. maybe until 10 if i can't stand it. there is news on at 10. then i can watch the weather and still watch Jon Stewart at 11.

i took a lot of pictures of the plants today. i'm leaving them time stamped, arranged in dated folders, so i can follow the progress later. maybe i'll make a video out of it. i've decided i can make videos of anything i want because no one watches them but me and doc. so that opens up whole new avenues.

Each and every time William gets knighted in A Knight's Tale, I weep like a baby. Doesn't matter how many times i see it. i even try to prepare myself, because i know it's coming, but that never works. it always gets me.

Most romantic song lyric ever: "She told me to come, but I was already there." don't you think? i question the soundtrack to this movie.

okay, resin smoked. cigarettes stuffed. intervention turned off. i can't watch people get high and not get high. it's painful.

i prepared a fresh pot of coffee for when i finish the left overs in an hour or so. i switched from cola, so i have some for tomorrow.

Life on BBCAmerica is doing plants for a change. cool.

speaking of cool, tomorrow it's going to be cool and less windy. so tomorrow i am going to rake. and maybe hoe. it depends on how much raking takes out of me. i might make doc hoe and then rake again when he's done. then i scatter my seeds. they don't need to go into the ground or anything, just be scattered on the ground. hopefully the cats will keep the birds scared off so they don't eat all my seeds.

i caught vader munching on the daisy sprouts tonight. yeah, he got sprayed with water. none of that nonsense.

less than an hour now until i wake doc up. coffee is made. his mug is clean. i'm sober. i should take a xanax. done. that way i won't be shaking and rocking when doc gets up. that drives him crazy.

he "fixed" the futon couch. pulled the cushion all the way up. now it hurts to sit on the floor and lean against. how annoying that i'm just noticing this now. i've been sitting here for several hours. i was sitting on the couch, but it's more uncomfortable "fixed" than it is "broken". the floor is preferable.

mmmmmmm . . . fresh coffee. i'm not worried about drinking it this late, i didn't sleep this evening at all. i slept for three hours last night and three today. i should be able to fall asleep. so long as i have The Fifth Element on repeat.

we're renaming Brian Setzer, to Billy Idol. Because of the scowl. and because if he turns out to be a girl, Billy is a more unisex name than Brian. we already have a girl named Fred.

how about that birthday cake? i didn't realize until i was looking at a picture of it tonight that i put the question mark candle on backwards. you would think i use the language. i was excited. i haven't had any yet, but doc assures me it is very good. i may have some tonight. or maybe tomorrow when doc brings more milk home. i don't have enough for cake and milk and for coffee. the coolest part about that birthday cake? doc got it for half off because the frosting was messed up on the side that didn't show in the picture. it was the first part doc ate so i had a perfect cake.

tomorrow i see my old shrink. i will get my normal xanax script from him, increase my anti-psychotic and switch to buproprion. and maybe try another sleeper. and get him to fill out the FMLA paperwork. explain to him that i went to see a new doctor that was closer, but he wouldn't fill out the forms or treat me after the first interview. maybe i'll just keep going to this old shrink. if it isn't too far away. the frustration with the new one has been too much for me.

getting pants today was a traumatic and dehumanizing experience. everything was either too big or too small. way too small. it was pure luck i found two pair of the same size and brand and cut. one in black and one in dark blue. and i paid less than twenty for both pair.

tomorrow we go pick up our couch after my shrink appointment. i wonder where he thinks it's going to go? which couch is he replacing with it? the black one? i hope so, i'm not ready to give up the futon yet.

doc is changing his work schedule to 9:30 at night to 5:30 in the morning. this is going to completely fuck up my schedule. i will have to find a whole new sleep schedule, which i guess i will base on his. it just seems like a rough shift, but he wants to get off the overnights he's doing now because he isn't sleeping enough but he's sleeping at the wrong times. he wants to sort that out.

i recharged all the batteries in my cameras today. i have three hours of Vader footage to go through. But my cameras are ready to use. i noticed that my smaller cannon has a 10x optical zoom. my larger cam only has 4x optical zoom. so i'll be playing with my small cam for the next few days.

i just sent doc an email asking him, no begging him, to bring condoms home. i marked it semi-urgent. he'll get it when he wakes up. i can't text him. for some reason, the text feature on my phone doesn't work. i should find out if SafeLink replaces phones after three years. there is so much wrong with it, and i've been gentle with it. i've only dropped it once and thrown it twice. and i threw it because it wouldn't work, the not working didn't happen after i threw it.

major has woken up and figured out i'm awake. meow mow mow. howl meow mow. i so wish i knew what he was saying. he used to stop when i held him to me and petted him, but not anymore. nothing shuts him up except him getting bored with his own voice.

the green things
in the terra cotta pots
surrounded by dark dirt
and white flecks of pearlite.
they reach toward the sun
and swim in the water i give them
they sit in the sun all day
soaking it in, making use of it