I'm sitting here in the dark. I earn my morning light, dammit. I've been up working hard since 3:30am and I deserve an early sunrise. This is ridiculous. Absolutely untenable.

Yesterday's interaction with the lovely and well-read, if rabidly racist, Diana Wingler on Facespace taught me a couple of things that I am still sorting out. One is the level of fear and persecution that (I'm learning), many people live under. And how that twists them into inhuman forms, just wandering around spreading fear and hate in the name of something else, anything else.

See, while I stayed in a madness-induced socially paralytic state for 20 years, the rest of the world grew up and now my "contemporaries" are acting a whole lot like the fucked up "adults" I grew up surrounded by and we all promised each other we would never become. I kept that promise. I held onto my love of discovery and wonder in the universe and all it contains. It's just now I know the facts and figures to back me up. I never closed off to the world and put myself in a bubble of resentment as I grew older like so many people have. I was like that when I was younger. Then I went into myself for a decade, then I came back out the other side, but I kept part of my childhood close to me.

Other people have done it. Notably scientists and scholars and artists. Mostly. Well, some. Too many are lost to what I've known from a tot as "middle age". They are ravaged, bitter victims of it. Three of four of my closest friends growing up are like me now. And two even have kids and they are wonderful with them, I envy what they have with their kids, because I never would have been able to have that, had I had kids. I just wasn't in a place for kids. I may never be, I may adopt when I'm 65.

But I will tell you what, I will adopt a white child. My parents tried to mix up our family, disabled, biological, Navajo, African American, Mulatto, Aryan . . . they tried to include it all before Angelina Jolie made it hip. And maybe it's working for the well traveled Jolie family, but it did NOT work for our white bread, white skinned, white minded surroundings. It was a vast mistake. They handled it all wrong, and I'm not convinced I'm qualified on the back of that to do it right.

The second thing that my encounter with the devastatingly charming, if completely unhinged, Diana Wingler, taught me was how insidious and rampant and multi-faceted racism is. Maybe she was right, and I do have White Privilege. I don't think I do. I've never really thought of myself as part of a race. I don't know, it didn't occur to me until they adopted the rainbow. And I have ignored it since leaving home and leaving the situation. I've been very careful about the people I surround myself with, when I chose to be with people. And so I was able to turn a blind eye to racism because it didn't affect me.

Wow, is it a powerful weapon. There is NOTHING like being hated for the color of your skin. It's only happened to me once, now, and I hope and will actually pray that it never happens again. Being hated for your sexuality isn't even as bad. Because you can hide that, to an extent. It isn't right out there for everyone to see right off as you approach. When someone hates you for the color of your skin, there is nothing you can do. You are their bitch. They will not change their minds, they will not be charmed, they will not see facts. They will, instead, twist everything you do or say to what they want to hear. And it doesn't matter how slowly you talk to them, they will not get it.

That kind of interpersonal brick wall . . . wow. I crashed head -on into it at 199 miles an hour yesterday with this dame. She was livid over a post I made suggesting that Native American outrage and activism would be better placed in things where it can do some good, not at random vapid blondes posing for pictures in a headdress. This chick went off on me. She was full of rage and pain and fear and a deep seated persecution complex that there was no breaking through. I mean, years of therapy will not fix this woman's issues, and we all know I'm speaking from decades of therapy here. And I just wandered into her. And she set me off. I had a little online freak out, not seen since B was bothering me on Facespace.

I told her I resented her judging me on the color of my skin. She said that proved my White Privilege. From there it was just down hill, fast. When I said that Native Americans do not have a god-given special claim to pain and suffering, she really lost it. I mean really, if we had been face to face, her voice would have been out of the range of human hearing. I felt pity for the poor keys of her keyboard. She said that was the most hateful and racist thing I could possibly say to the Native Americans. And it proved all the shit she said about me. Wow. I will say it again, wow. I just . . . I don't. Wow.

So then I apologized to the owner of the wall that this went down on, for losing my temper on his space. She thought I was trying to take back what I said. So I set her straight and even apologized for calling her a nasty name, though she probably didn't understand it. She let me have the last word with that. I didn't really want the last word, I never get it. I'm never interested enough to try to get the last word, I'm the kind of person that just walks away from confrontation. So this surprised me. But I'm glad it ended. The chick was toxic.

And the owner of the board, well he just posted a song on youtube and liked a photo of mine in response. Brilliant. Love him to tears.

Oh my god, is that dawn coming? Really? I had just about given up hope.

Today we take my bed apart. Yay. Then we put it back together. Then I move back into my room. Strange.

A friend posted this wonderful picture of a platform for the futon mattresses that are going outside. It involves bright paint, a dozen cinder blocks and four 4x4s. Cheap, easy, comfy. Now I have to look for table designs. We need some low tables out there in the yard. at least three of them. And soon we have to plant. I'm going to try to find and use sprouted and semi-grown Wooly Thyme for my side of the yard. 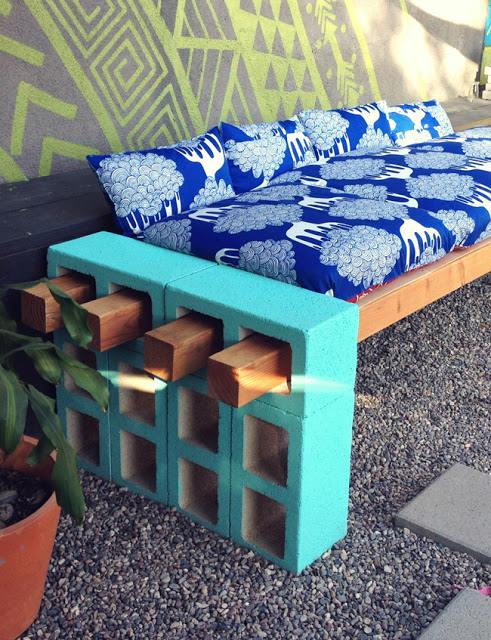 This is the bench/couch we're going to make for the futons. 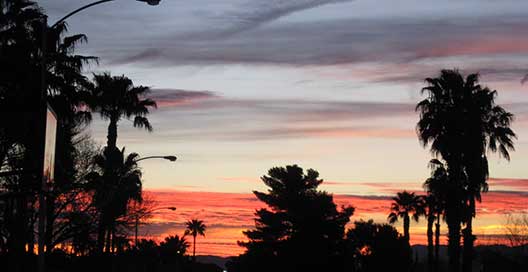 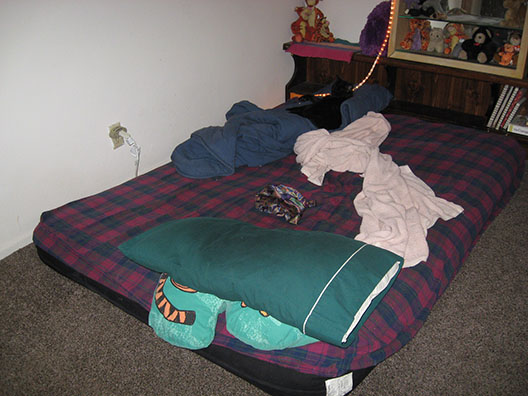 My old bed, see how thin it is? And it's all on the floor like a college apartment.

I've decided to go with another font for my new website design. I've built everything so that I can go in and change it in the the designs with only a couple hour's work. I still haven't decided on the font, though. Something blocky and grungy, to mess up the clean colors of the site a little and go with the rough banner design. The architect font just wasn't doing it for me over time. I knew it wouldn't. I knew it was no use continuing on my site until I did decide on a font.

I'm having problems running Google's NIK Collection in PhotoShop CS6. It keeps shutting done the program. I was having this issue earlier, so i replaced the filter set (that's what NIK Collection is) with an earlier version. I think I'm going to have to take it down another version. My laptop is just not powerful enough to run all the graphics stuff I want to run. They recommend 4Gig of RAM, which I have, but you know if they're saying the minimum is that, then it would be better with more. The sum of this is: I will die without that collection of filters. I have come to depend upon them.

Oops, Chewy is barking. I left him outside. Oh, there is a cat stand-off with New Kitty and Vader in the palm trees. That will work itself out. Vader is tough.

The cam, if you're interested, is focused on the patio, where I have a dish of cat food out for all the cats in the neighborhood. Your challenge is to capture a cat on cam and email it to me. This way I can keep a count of what's coming and how much my cats are eating of the outdoor food.

Tra la la. Time to go back to work. I've got it down to four fonts. I'll be able to decide today.

And we got nothing done today. I slept. Doc didn't feel well. He went a got the laundry from N's house, but other than that, it was a wash. My bed is still in the hallway. The fencing is still wrapped up. The palm trees still unruly. And the kitchen still a mess. I'll clean that in the morning when I get my rush of energy. Right now I'm trying to decide whether to stay up or lay down for another couple of hours. I'm lazy like that.

I'm making the switch back from Facespace to Twitter. I have plugged in all my news outlets, and then some. That should keep me off Facespace, and away from conflict. People are ugly, I want no part of them. You people aren't ugly. You people are pretty. I like you all, you can stay.

I have a huge swollen spider bite on my forearm. It itches like mad. The first day it wasn't swollen, and I mistook it for a bedbug bite. But on the second day, it got big and the itching didn't go away, it got worse. I hope I squished that motherfucker in my sleep. Big itchy lump on my arm, driving me crazy. Rarr.

I finally got to watch Cosmos. Brilliant. I noticed the Right went off on Twitter about it last night. What did they think? Tyson was going to continue Carl Sagan's legacy by dispelling all those pesky evolution myths? I mean, really. Science, people. I know it seems new, but it's actually hundreds, maybe even, dare I say, thousands of years old. Deal with it. Way to go, Seth McFarlane.

If I make a fresh pot of coffee, I am pretty much guaranteed to lay down, it always happens that way. But this stale coffee is really awful. I should eat something, I've been on a starvation thing, I realized. I just simply haven't been eating for no real reason. It just never occurs to me.

I have a list of work to do, sitting here, written in red and teal according to priority, in a spiral notebook that I spilled a cup of coffee on last week. And I am ignoring it. Though it's hard. The thing is in my periphery.

And for some reason, I am currently driven to chain smoke. The only thing stopping me is that I have no smokes stuffed.

I think I'll make that pot of coffee and actually try to stay up. If I smoke outside, I'll stay up. It's when I smoke in the kitchen that I get tired because that is where I smoke when I get up in the middle of a nap.
Collapse