i found the source of the food poisoning. at first i thought it was the dip i had with chips at lunch. but doc ate some of the dip and was fine. when i got up from my sleep, i refilled my glass of tea and started drinking away. by the time i finished my last post i was in screaming pain again and throwing up. so i put the tea down. another beverage ruined for me. i don't think i'll ever want to drink Arizona Raspberry Iced Tea again. that pain was just too bad. i am a puss.

my spirit has reinflated itself. turns out it can't be kept down.

i am sorely disappointed in my fellow American's reactio to the Coca Cola commercial yesterday. if you haven't seen it, it has a gay couple in it. did that cause outrage? no. the commercial featured the song "America the Beautiful", sung in different languages. it was beautiful. The greatest commercial Coke has made since it wanted to teach the world to sing. And conservative America flew their Racist flags high. They were so outraged about other languages in their commercial, they didn't even notice the gay couple. which is good because i didn't want to hear more of that noise. and i'm glad all these bigots are switching to Pepsi. I wonder if Chick-fil-A serves Pepsi or Coke, because that could be a problem. (pause, i had to go tweet that)

i smell again. i sweat a lot when i am working. it's the stress of thinking. my hair is too long to let the steam out through the top of my head, so it goes out my armpits. i'll take another shower again when doc leaves. speaking of which, it is time to get him out of bed. 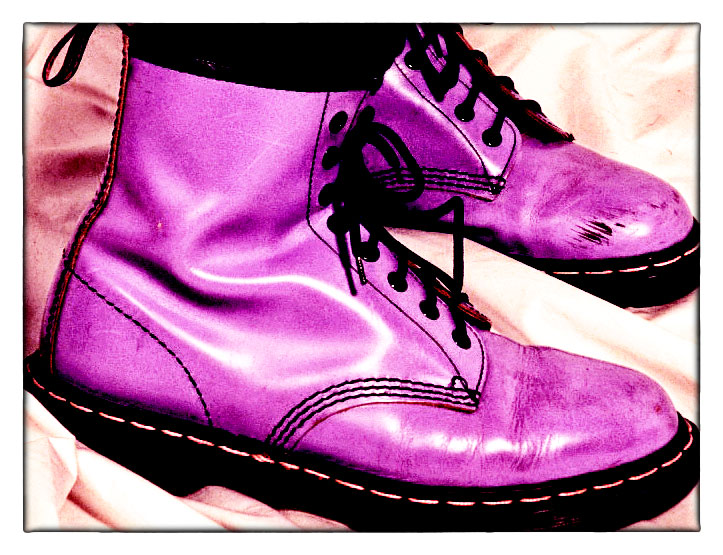 this picture is brilliant because it marks the first day i knew the power of Efex Pro filter set on photos. There are about five filters on this image, to bring out detail and to, remarkably enough, change the color entirely. these here boots are lime green. bright, neon lime green. and through some combination of filters, i wound up with lilac, and the nicest shade of lilac, not a pussy shade of it. with the filters, brushes and textures i have, there is little i cannot do to an image or graphics. i have collected, what, i think, so far is the best collection of Photoshop related software available. until i find a new filter set, of course. but according to what i've read, i have the best. (Vexing! i could pass these all on to Kelli and she would be better equipped than most companies, i can't count the number of design jobs i had to bring my own filters and brushes and fonts to).

three hours have gone by and i'm not sick. i haven't eaten, and i've only had water and coffee. and not much coffee at that. a liter and a half of water in the past hour. i'm afraid to eat. and we just went to the shops. *sigh* we have fresh fruit and produce, bread and crusty rolls and cheeses. the only thing we didn't get was meat. doc likes a different shop for the meat. the produce department was as large as the bulk food section. it was amazing. it's been a long time since i saw a produce area that big and widely stocked. they had five different kinds of onions, not even getting into the spring onions or leeks. they had leeks, and i was going to get potatoes anyway for potato pancakes, but i didn't like the look of their potatoes, they were too big. i like them medium sized. even though i cut them up. if i want potatoes to bake and top, i go for the giant ones, but for puree-ing and shredding stuff, the medium sized are my choice. all my recipes in my head deal with medium sized potatoes, so there is the volume issue to think of, too.

mmm . . . fresh coffee. then to answer my email and get to work. tonight i am keeping Photoshop closed and reading "WordPress for Dummies" to see if i can do my/Kelli's site with it. i hear it may be much easier to accomplish what i want to do without all the research. but there's still research. who knows, this may mark my re-entry into design professionally again. ZenWeb Media is just there and waiting for a purpose. have a good late night/early morning.

ack! my head just exploded. i just read about half of what i need to know to do a wordpress site. it is not for me. i would have to relearn a lot of stuff in a different way. i'll just stick with hand coding and designing complex graphics. i don't need a clean, antiseptic site. i plan to leave the social media bar off of my portfolio and video pages. so, no clutter with the art. at some other time i will finish the wordpress book. but i've been doing it from scratch with only the help of Dreamweaver for ten years and am loathe to change. wordpress would be even more inappropriate for kelli's site as mine. i could at least have an update section in place of a blog. but she doesn't plan to update, except for art, and that is for me to do when she uploads new work. so . . .

that was fast. only a few hours. if i didn't have dreamweaver, i would consider it. if i had no knowledge how to code. but to use someone else's code and tweak it to what i need, ick. takes me back to the days of Front Page. and man that was a horror show. everything it did, it did in the most complex way possible, making tweaking a scary thing. i am scarred.

i MUST judge the poetry contest today. i was too wrapped up with being ill yesterday to do it. so i've got the page all loaded and the 12 entries ready to go, and these people had better make me laugh.

okay, some of the people over at allpoetry are just stupid. they aren't the rampant, raging ignorant that you find on twitter or facespace, just lacking in common sense and thinking they are oh-so-clever and literate in their snarky comments. the last one i called out on it, and they didn't know what "snark" meant, so i gave the urban dictionary definition and credited the urban dictionary, and they gave me the credit for being clever. stupid. like stoopid.

all i have to do to advance further at that site is win more contests and more applause on comments. i started a new contest. that's what i got the snarky comment about. bitter about not being able to compete for 200 cyber points because you didn't like the example i put up? grow the fuck up! i don't want to hear about it. i don't owe you anything little man. and it's the men. yes, the men who do this shit. women will snark grammatically, but not literally. no, it is the men who have an issue with the song prompt i put up. so? so i slammed him down. whatever.

other than that i've been very productive. i wrote four poems fresh, found and used an old one from Hunter Thompson's death, and resurrected a 2 decade old poem about suicide that never got the attention it deserved and rewrote it for entry in another contest. i have nothing more to do on that site than enter poetry contests, which are just fancy ways of getting me to write new poetry without having to "Wait for the muse", and comment on other people's poems, which i have to do every time i submit poems. It works so that when you go to submit a poem, you are directed to a page of other poems and forms and you must fill out the comment forms for at least two poems to proceed. oh, and win some of the contests. so i can start new ones. i dont care if i'm winning or not, as long as i'm writing and reading new work.

i stayed awake today to call kelli this afternoon and doc passed out on me. i was hoping for some frooky time with him, but no, he sleeps. i have to talk to kelli about her art for her site. i'm really excited to do her site. i'm hoping she is up for picking a font, one that she really likes that says KAM316 to her. i will use that as the specialty font and then choose a nice, tasteful Helvetica for the rest.

i kept thinking the notice on the contests that said "new only" referred to new users, and have not entered poems that should have won some contests. only today did i figure out it means "new poetry only" no "pre-writes". which, how would they know, if it fits the subject matter, which two did. both were generic contests about suicide. both poems were generic poems about suicide. both very impactful in their own ways. the other contests i entered i wrote the poems right then for them. four, i think i did. i don't know if any one of them is a winner, i hope so. i have to win to advance. and to earn more points to host more contests.

all i have left to do is start and win contests on allpoetry to advance to level ten. i'm on level 7 now. i have to win a contest to reach 8. so i entered about ten of them today and i'll enter another ten tomorrow. i've found that some of my poems are missing. i've also found a lot of material i've "never" seen before. maybe i'll open up my excel spreadsheet tonight and organize it. i thought i had it all organized, but it turned out i just had the first two books organized. i have enough "lost" poetry for a whole other book.

i also found a couple of chapbooks i put together. so i want to do some artwork and publish those on lulu.com. they are the only printer that keeps the chapbooks affordable. i can charge $5 for them and still make a few cents. not that i've sold any, i'm preparing for the rush.

i joined soundcloud and posted some spoken word there. so now you can buy "Stop Poking Me, Lady"s audio tracks on sellfy.com, or listen to them for free on myspace.com and soundcloud. or you can listen to work from "Daisies" on my site. keeps them travelling and wanting more, so i hear. i also found another poety site to post my stuff, i'm going to read through it tonight and find out what it's about.

finally talked to kelli and told her what i needed for her site. she wasn't as reluctant as i thought she would be. hopefully she will be done with her tasks by the weekend, so i can start on the site monday.

kelli pointed out today that no man would ever really think sex was off the table, they would always be convinced in the backs of their minds that they will be the great seducer, so she said that can't be the reason they are not answering me, it must be something else. so again, i am defective. not one man who i have replied back to has gotten back to me. not one.

kelli also pointed out that what i really need is a gay man, i know, i'm born to be a hag. but there are no services out there to hook straight women up with gay men. and there should be. i should do that with zenweb. it's a service badly needed.
Collapse